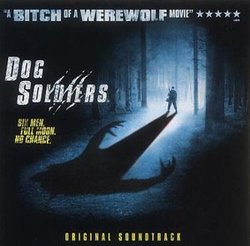 Dog Soldiers is a surprisingly well-made British horror film from 2002 about a family of werewolves stalking a group of soldiers also features a surprisingly good, thematic score by British composer Mark Thomas. The album opens with an immediate presentation of the main theme by a full orchestra, backed by pounding militaristic snare drums. This theme is utilized very effectively and frequently throughout the score and makes the 70-minute album a very enjoyable listen. The score also contains a second theme, "Sarge's Theme", which is similar to the main theme, but a bit more restrained and usually performed by strings rather than brass.

Dog Soldiers is, of course, a horror film, so much of the music is suspenseful, but the film is also an action film, and it is these cues where the score becomes really fun. Thomas uses heavy percussion either solo or to back the orchestra ("Silhouettes", "They Think It's All Over"). The former even draws the main theme into the mix with the orchestra racing along beneath it. "Sanctuary" brings a short respite to the action and suspense music and features a solo horn and solo flute performing the theme.

The album contains DeBussy's classical piece, "Clair De Lune", which fits in nicely with the rest of the score. The album then ends powerfully with the action cue "Full Moon" and the finale cue "Comrades", which again features the main theme on various solo instruments. The last track, "They Think It's All Over", is a solo pounding percussion piece which, I believe, is out of order on the album. I remember this type of music from one of the later action scenes. But it does end the score with a bang. Dog Soldiers was so well-received for its genre that I hear a sequel is being filmed. One can only hope that Mark Thomas will return and deliver a score of equal quality.