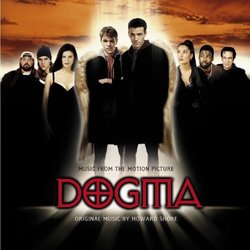 After recently scoring another David Cronenberg film, eXistenz, composer Howard Shore teams up for the first time with cult-indie director Kevin Smith for the farcical religious road picture, Dogma. The film stars Ben Affleck and Matt Damon as two dimwitted fallen angels who try to take advantage of a loophole in Catholic doctrine to get back into heaven, and have their sins and past mistakes absolved. Through a rather odd set of circumstances Bethany (Linda Fiorentino) is tasked by The Metatron (Alan Rickman) to stop them from entering a certain church and negating all of existence. Along the way she gets help from Rufus (Chris Rock) and Serendipity (Salma Hayek) while running into baddies, the Stygian Triplets and Azrael (Jason Lee). Some unlikely prophets, Jay and Silent Bob (Jason Mewes and Kevin Smith), are tasked with protecting Bethany on her trip. All of this plays out over the length of one of the funniest and well-crafted scripts of the past few years; slated to hit theaters November 12. This date is almost two years after filming was completed, due to distribution wrangling within Disney and Miramax because of the potential inflammatory content.

The score is a very minor departure from some of the style that Shore is popularly known for. The music is central to fleshing out the feel of the movie, a gothic pseudo-religious tone, heightened by a boy's choir and liberal use of church organs. The script provides for the lighter moods (although the "Mooby The Golden Calf" theme does have its moments) but Shore's work heightens the action and suspense to the appropriate levels. Even Alanis Morrisette's song, "Still", has its appropriate moment. For a comedicaly-toned film, this is the darkest music I've ever thought of accompanying it with. It lends to the departure from the typical Hollywood "cookie-cutter" thematic material that is usually required of composers in today's movie-making environment. Shore broke away from that rut with his first association with Cronenberg, and when given the chance in a more high profile film, he rose to the occasion with his extremely memorable and appropriate work on Ed Wood. While not in the exact same vein, Dogma owes its musical genesis from that exact heritage.

This is one of the few times in recent years when a film has everything going for it and is at the mercy of the eventual audience to decide its true fate. It will be wrapped in controversy, but don't let a simple bias keep you from enjoying a film that has a perfect cast working with an excellent writer and filmmaker accompanied by truly enjoyable music. Go out and see it sometime, if only to hear some of Alan Rickman's (whose reappearance to the masses is a welcome return) choice lines.