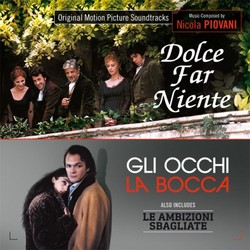 In collaboration with Gruppo Sugar, Music Box Records is proud to present not one, not two, but three Nicola Piovani scores.

Dolce far niente (Sweet Idleness, 1998) by Romanian filmmaker Nae Caranfil explores the life French author Henri Beyle aka Stendhal during his times in Italy as he gets mixed up in romantic intrigue and political machinations. Piovani's music adapts some of the most popular Italian tunes to cover the friendship of Stendhal and Rossini - the package is rounded out with the song by "Quando il sole spunterŕ" ("When the Sun Comes Up") by actor/singer Pino Ingrosso.

Le ambizioni sbagliate (1983), directed by Fabio Carpi, is a television adaptation of Alberto Moravia's novel about an unhappy marriage between a journalist and his socially higher ranking wife. The TV production has a short, mostly strings based underscore underscoring the strains of married life.

Marco Bellocchio's Gli occhi, la bocca reunites the director with Lou Castel, the actor who helped kickstart the director's career with I pugni in tasca (1965). As a failed actor returns home for the funeral of his twin brother, he finds himself doing his greatest performance, filling up a hole in the life of his recently widowed sister-in-law. This most unusal romance gets a beautiful underscore with two separate ideas underlining the relationship, including a wonderful piano piece and a folksy waltz.

Out of the three scores, only Dolce far niente had a previous CD release with about 15 minutes of music. This new CD expands on that length by almost doubling the program and including Le ambizioni sbagliate and Gli occhi, la bocca, two previously unreleased soundtracks. This present edition has been fully remastered from the session tapes and includes an 8-page booklet with liner notes by Gergely Hubai, discussing the films and the scores. The release is limited to 300 units.