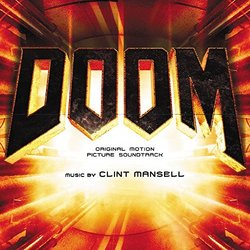 Clint Mansell exploded into the action genre with the Dirk Pitt adventure Sahara. His latest project for the video game play-based film Doom continues his foray into this genre. Varese Sarabande\'s album release is just over an hour and honestly, it\'s a bit too much. This music is loud and sounds like an instrumental rock concert. There is some use of brass ("Olduvai/Facing Demons"), but the majority of the music is synth. It\'s not thematic action music like some of Zimmer\'s late 1990\'s work, but aimless game play rock. The cues that are not action-based are generally filled with ambient electronics.

Generally, this style works for the film, but on album, it is not engaging. After Sahara, which was one of my favorite action scores this year, I was looking forward to Mansell\'s next work. Unfortunately, the score for Doom was probably the requested sound from the filmmakers. As a side note, the Mansell-mixed Nine Inch Nails song at the end of the album sounds like they finally added vocals to the hour-long rock song that had played throughout the entire score. Mansell can write great action music when allowed - skip this one and wait for his next effort.