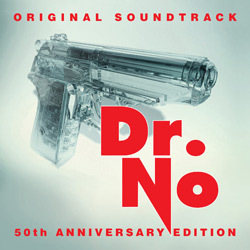 Commemorating the 50th anniversary of the release of the first James Bond movie Dr. No, this unique release contains music from the original album release plus many of the cues that were not on that album.

Long a contentious issue about who actually scored the movie—Monty Norman won a celebrated court case in London—we will leave the listener to decide for him/herself.

With newly commissioned notes from renowned film music writer, Randall Larson, this is definitely not a title to be missed!