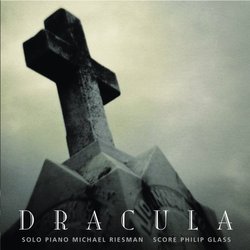 Philip Glass\' re-scoring of the classic Universal motion picture Dracula offers listeners a rare opportunity: that of hearing three distinct orchestrations of it (four if you were of the lucky few to see the movie premiere with Glass and the Kronos Quartet performing the score live to picture). The original soundtrack was released in 1999 by Elektra/Nonesuch and James Barry\'s review of this release can be read here. It is Glass\' score the way it was meant to be heard for the movie, with a tight string quartet offering a disturbing chamber-sized accompaniment to the gothic proceedings. A more fleshed out rendition of the score can be heard on the iTunes exclusive release Music from The Hours and Other Philip Glass Film Scores, my review of which can be read here. This was recorded at a live concert given by Michael Riesman and the Stuttgart Chamber Orchestra and the quartet was supplanted by a string ensemble, giving the four chosen cues from the score added depth and drama.

Now comes another re-working of Glass\' score, this time performed solely by Michael Riesman on piano. The performance is very good, but there is very little I can say that hasn\'t been said already by James Barry. The music is strong even if the album does slow down a bit during its middle portion. The first cues take us on a mad ascent through the Transylvanian landscape, with "Carriage Without a Driver" being a definite highlight. The last cues form a prolonged climax where the frenetic theme for Dracula is given multiple amazing performances. The middle portion is more tranquil and bathed in soft romantic hues with some intimate, dissonant cues such as "Horrible Tragedy". On a personal note, I found the sound of the piano to be more listenable than that of the string quartet and thus Dracula (for Solo Piano) might be better suited for listening outside of the film itself. The aggressive whines of the strings (quite appropriate for the movie) are replaced instead with the softer colors of the piano and made the entire listening experience more enjoyable for me. It is interesting to note that, unlike the original soundtrack release but similar to the suite from Music from The Hours, the album concludes with a reprise of the main title dubbed "Dracula: Epilogue".

Dracula is a solid and well-crafted piece of work by Glass which, on a minimalism scale from 1 to 5 (where 1 is Koyaanisqatsi and 5 is Notes on a Scandal), might land on 3. People turned off by intense experiments in minimalist progressions could still enjoy Dracula and the solo piano performance here is strong, making this adaptation of Glass\' score perhaps even more enjoyable than the original soundtrack release.