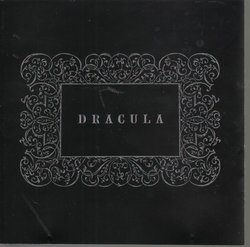 The score was written for the video re-release of the film, and Glass chose as his ensemble the Kronos Quartet, sitting that the film's mostly parlor-like atmosphere lent itself to a chamber ensemble. ("You could almost imagine a string quartet playing just out of view," Glass said in a pre-concert discussion). On disc, the twenty-six tracks often flow one into the other, and if you've got any fondness at all for Glass, it should go over quite easily. Being a Glass enthusiast myself, I was thrilled—not to mention that I think his best work tends to be for the string quartet.

But what of the live performance, with the addition of Glass playing keyboards and Michael Riesman conducting? There lies the real wild card. Apparently, it was Glass and Kronos who came up with the idea to perform the score live with the film, and Universal (surprisingly!) backed them all the way. I had the chance to see Dracula live at UCLA's Royce Hall, and the thunderous applause that followed showed that I wasn't the only one who thoroughly enjoyed the experience. The film was projected on a semi-transparent through which the performers could be seen from time to time. An unusual effect, and certainly not to everyone's liking, but I found it a splendid way of displaying both the film and the live performers simultaneously.

But what of the music, and what of its place in the film? Admittedly, there were points where the score drowned out dialogue, and there were times when the music really didn't seem to match what occurred onstage, but for me, these were upstaged by the more frequent moments when everything clicked, and led to amazing results. I was particularly blown away by the last eight minutes of the film—the climactic rescue of Mina and demise of Dracula played out as though choreographed to Glass' driving and intense music.

But now, what of the album without the film? I must say, I don't mind the lack of keyboards on the disc, and when I need a quick fix, "Carriage Without a Driver" still does it for me. All in all, a fine piece of work on it's own, and in the film it was written for. Those who call Glass a blasphemer for "tampering" with a classic ought to have another listen ... and it's set me to thinking of how many films I might enjoy more with a memorable score!