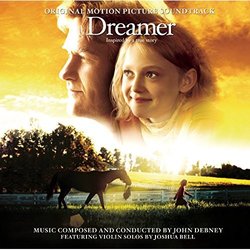 One might wonder if John Debney\'s prolific career - in 2005 he scored six films, co-composed two others, and wrote themes for a further two - would hinder the quality of the music he writes. The answer is a resounding "no", and his score for the family drama, Dreamer, proves it. Using his well-known style of layered orchestrations and sweeping themes, Debney\'s music provides a warm, powerful accompaniment to the film while also adding a sense of motion for the racing scenes. Throughout the hour-long album, Debney\'s score never loses its strength or momentum.

"Theme for Dreamer" opens with a soft piano introduction that leads into a solo violin statement (performed by Joshua Bell) of the main theme. Debney wastes no time in building up the orchestrations and the tempo: "The Stand Off - 1st Ride" introduces other instruments performing the theme, including the horns, and a pulsing string line, like Goldsmith\'s Rudy, moves the cue along. The brass is not always present in the score, but their performances are spectacular when they do. In "First Race" there are some powerful blasts by the low brass as well as trumpets and horns soaring above. A bit of western instrumentation is also added, as in "Sonador in Harness" and "New Owner Montage".

Debney\'s theme is strong, but it is made even better by its near-constant use. However, it does not get old because of the variability of its performance, running between the woodwinds, strings, and brass in a mix of solos and full-orchestral statements. The music shines during the more dramatic moments when the orchestra is allowed to step up the volume a bit ("Runaway Horse"). One of the best statements of the theme is in "Sonador Chosen" when the horns play the theme in a sweeping statement over a string countermelody. The finale cue, "Last Race", as expected, builds to a triumphant close with multiple reprises of the theme.

While there are no surprising elements to this score, Debney\'s orchestration and thematic development are - also as expected - amazing. The album ends with the song "Dreamer", performed by Bethany Dillon and a bonus track of the film version "Main Title". This score is an excellent addition to the sport genre along with Rudy, The Legend of Baggar Vance, and Remember the Titans, to name a few.