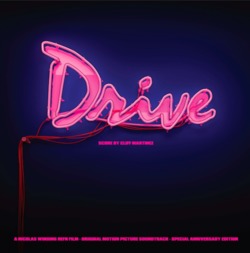 Cliff Martinez's iconic soundtrack to the cult classic film Drive by Nicolas Winding Refn is turning 5, and to mark the anniversary, Invada Records and Lakeshore Records will be co-releasing a limited edition version of the soundtrack. This features Martinez's score and all other music used in the film, including the legendary tracks by College, Kavinsky and Desire.

There will also be a 'Neon Pink' Retail Version.