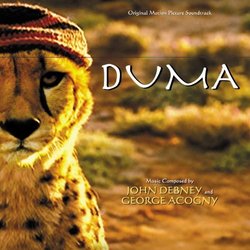 It is very nice to see John Debney breaking away from his typical comedy genre. His score for Zathura harkens back to his "seaQuest" and Cutthroat Island style, and with Duma, a film about a boy befriending an orphaned cheetah in Africa in the vein of Two Brothers, he returns to the ethnically charged feel he developed for Passion of the Christ. Collaborating with music supervisor and songwriter, George Acogny, Debney\'s score depicts the cultural landscape of Africa through his music in a realistic way with a similar approach to that taken by John Powell for Endurance and Alberto Iglesias for The Constant Gardener.

Duma is a different musical sound for Debney. Like Passion of the Christ, gone are his recognizable complex orchestrations and sweeping themes. In their place is a more restrained score with more solo and small ensemble performances of piano, strings, and vocals backed by percussive and ethnic instrumentation. Some of the orchestrations that contain wooden percussion and African vocals are similar to some of Zimmer\'s work on The Lion King or Goldsmith\'s African scores like Congo and Ghost and the Darkness. Also like The Lion King, some of the cues are comedic and lighthearted, such as "At School". A very subtle theme floats through the background of much of the music and surfaces prominently in only a few places, such as in "Leaving Rip" and "Freedom".

The album opens and closes with African songs, "Phiry - the Bird Sings" and "Issa Lullaby". The most enjoyable cues of the score are some of the few moments of action when Debney breaks out the Zimmer-like ethnic percussion and vocals ("Croc River" and "Run to Village"). In "Croc River", the tense action sequence is followed by a statement of the theme over a short vocal performance. The highlight of the album is "Freedom" where an African chorus and the percussion build together with French horns added for color playing the theme. This uplifting cue pulls at one\'s emotions as one of the final scenes unfolds. This is a solid score and it is nice to see Debney continue to try his hand at different styles. For fans of ethnic and world music or Debney\'s more serious scores, this one is worth checking out.