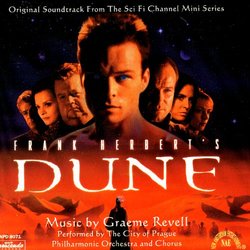 "Dune" is a classic science-fiction saga written by Frank Herbert. Brought to the big screen in 1984 by David Lynch, the film was confusing and convoluted, primarily due to the writing and condensation of a rather large novel into a two-hour film. Recently, the Sci-Fi Channel aired a new 4.5-hour long miniseries that did greater justice to the book, even though it was a "made for television" film, and the budget was more limiting than if it were a theatrical project. Nonetheless, the miniseries had over 2-hours of original score by Graeme Revell, and while it wasn't the most prominent thing he's done lately, there is a good variety of thematic material that makes the album a nice companion piece to the film.

Broken (as with the film) into three parts, the score follows the same structure. Beginning first with the "Main Theme", a slightly ethnic melody that reminds me in part of the love theme from Speed, this first third of the album contains a lot of atmospheric and percussive cues. "Pain Box" is a low-key cue, and "Dreamscape" contains a breathy flute that feels very desert-like. "Worm Sign / Escape the Worm" is a rather tense orchestral piece that consists primarily of timpani and pulsing strings, and the action heats up with "Up The Ladder / Battle". As with many of his scores, Revell is using his talents in the percussion and atmospheric arenas more than the full-orchestral thematic one. That isn't to say there aren't themes - they fill the score - but they are not the focus of the score.

Revell's ethnic flare is quite evident in many of the cues, especially in "Conquering The Worm", where the orchestra and vocal talent really start getting into the rhythm of things. The fight cues work well, but all seem to blend together after a while. Similarly, the atmospheric cues use the main themes, but after a while they too seem to mesh together. In the end, I found the Toto Dune score to be more memorable, and I can swear I even heard a hint of their theme in some of the score (but it's not on the CD). With 67-minutes of music on the album and over 2-hours written for the film, this album does represent the best bits of score. Even then, though, it's just satisfactory. In short, it's an enjoyable album, but not really anything to rush out and get unless you really enjoyed the miniseries.