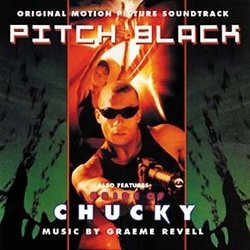 David Twohy's science fiction thriller Pitch Black didn't make any excuses.  It was all about tension and fear, and less about plot and characters.  After a crash landing on a remote planet, the survivors (including settlers and one prisoner being transferred) quickly discover that they are not alone.  The film was rather fun, and Vin Diesel's performance as Riddick (the prisoner) was chilling in many ways.  Adding to the tension and atmosphere of the film was Graeme Revell's percussive score.

Many of the cues are quiet and rhythmic, adding to the general atmosphere and ambience of the film.  The first act of the film is spent regrouping after the crash, so much of the music is subdued and serves mainly as window dressing.  "Elegy" stands out, however, as a more dramatic musical cue, and adds a much needed element of humanity to the situation.  "Desert Journey" is a rather upbeat piece, as the survivors hope to discover a way off the planet.  They do, but it requires them to get batteries from their own crash.  Unfortunately, this planet (which has three suns) has another life form living on it.  A life form that only comes out at night - to feed.  Conveniently (or inconventiently), the three suns are going into a super-total eclipse - and the race is on to get the batteries without being killed.  This begins with "Race Against The Sun", a great cue featuring the main theme with some driving percussive beats.  As the track progresses, the tension rises, and ends with a clashing of electronic and percussive dissonance.  "Total Eclipse".  Another high-octane cue is "Move!", which provides over six-minutes of nail-biting percussion and synth/orchestra effects.  The film climaxes with "The Rapture", a rather dark cue almost religious in orchestration, with brass and strings, with bits of choral and percussion.  The film ends with "Goodnight", a rather sad restatement of the main theme, replete with percussion (of course).

Also on this album is Revell's score to Bride of Chucky, the third sequel to Child's Play.  The infamous possessed doll is back, and this time Revell turns on the satire.  Sure "Tiffany and Chucky" sounds like a knock on Broken Arrow, but that's not the point.  The whole film is a knock on the horror genre, and Revell gets to have fun with it.  There are enough cliché horror score devices used in "Break In / That's Our Chucky" and "Voodoo For Dummies / Master At Work" to keep any horror aficionado satisfied and smiling.  "Plastic Love" is just funny, and "Domestic Bliss" is disturbingly quirky and peppy - the use of strings, pizzicato and vibes is quite amusing.  "The Amulet" and "Tiffany Kills Chucky" aren't as enjoyable as the previous cues, but "Reunited" is enough of a bizarre cue to remind you that this movie isn't conventional anyways.

These two scores were recently released as a promotional album through Super Tracks (available at http://www.supercollector.com/), and while I don't think that it's a "must have" album, the Pitch Black cues are noteworthy and might entice you into picking up the disc.  For completists and collectors, this is probably one you'll get anyway - but everyone else might be advised to check out the films first if they aren't sure.