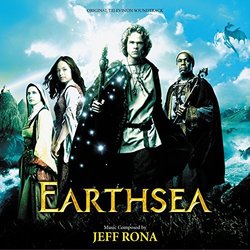 Performed by
The Slovakia Radio Symphony

Jeff Rona's approach to scoring films and, more recently, television mini-series, tends to feature ethnic instrumentation and solo performances. Whether working on projects for Hans Zimmer (White Squall, Gladiator, Black Hawk Down) or his own (Traffic: The Mini-series), his ability to create soundscapes for other times and places no doubt helped him land the task of writing the score for Sci Fi Channel's epic mini-series, Earthsea. While his approach to Earthsea is similar to Traffic: The Mini-series - even using some of the same soloists, such as cellist Martin Tillman - the end result is as different as the two television series. Where the underscore in Traffic was primarily ambient electronics, the music for Earthsea maintains a quiet, yet firm presence.

Rona's music features numerous solos, both vocal and instrumental, including four sopranos, two cellists, celtic harp, uilleann pipes, and the composer himself on flute and percussion. The tracks on the album are generally short, though the album runs over an hour in duration, but the variety of sound and styles keeps the music interesting. Rona's main theme for Earthsea is presented in the "Main Title" and it is used frequently throughout the score. This theme appears in many forms: triumphant in "Sailing", celebratory in "Wonderful Friend", and more sorrowful in "A Lesson Learned". A secondary version of this theme appears in a wordless female choir in the "Main Title", "Sparrowhawk", and "Light Over Earthsea".

What makes Earthsea a surprise as a fantasy score when compared to other such works like Trevor Jones' Merlin is the soloistic approach, more along the lines of more recent mini-series fantasy scores, such as Brian Tyler's Children of Dune or Richard Gibbs' Battlestar Galactica. The use of various ethnic instruments keeps the movie from acquiring the feel of a certain culture or time, but gives it an otherworldly sense. Martin Tillman's cello solos, though infrequent, also provide an eerie feel to the music when appropriate ("My Strength", "Dragon's Tale"). Other cues with notable solos are the horn and flute duet in "Isle of Roke", the trumpet and horn solos in "Dragon's Tale", bagpipes in "Light Over Earthsea", and haunting vocals in "The Last Song". Unlike numerous composers since Gladiator, Rona wisely avoided the now overused sound of the duduk. His choice of approach and instrumentation is superb and makes Earthsea a surprisingly enjoyable listen; it effectively transports the listener to another world.