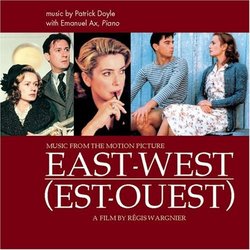 After working on Quest For Camelot, the next feature film that Patrick Doyle tackled was the Cold War drama East-West. Focusing on the trails that a family must face after returning to Russia just after World War II, East-West provided Doyle with the opportunity to write a score that is dramatic, exciting, powerful, and emotional in its scope.

From the beginning track ("Opening Titles"), we can hear the exciting dramatic elements that Doyle previously brought us in films like Mary Shelly's Frankenstein and Dead Again. "The Land" is the first of many cues on this album that are tributes to the sacred Russian choral style - if you've seen The Hunt for Red October then you'll know what I mean. It is absolutely beautiful to listen to, and worthy of the "repeat" button on your CD player. In fact, many tracks are worthy of that honor, which makes this one of the more enjoyable CDs I've heard lately.

Another element on this album that stands out (and is even mentioned on the front cover) is the performance by Emanuel Ax on the piano. "The River" is absolutely riveting to listen to, and sounds like a rather large piano concerto - but with a lot more orchestra. The suspenseful themes are definite and striking, and it's always refreshing to hear a score that you can hum after listening to.

There are a few "source" cues on the album. Without looking closely at the liner notes, you might be under the impression that Doyle wrote these traditional sounding songs, but that is (sadly) not the case. The military-style march "Farewell of a Slav" was written Vassily Agapkin, and the operatic "Nightingales" was penned by Vassily Solovyov-Sedoi and Alexei Fatianov.

The album runs a bit over 50 minutes in length, and was truly enjoyable to listen to. With plenty of memorable themes and the utilization of a full orchestra and choir, Doyle's score to East-West is an essential addition to any serious film score collector.