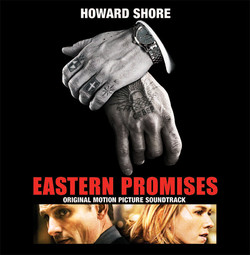 Nicola Benedetti\'s solo violin immediately presents Howard Shore\'s main theme to Eastern Promises, the latest film he has scored for long-time collaborator, director David Cronenberg. True to the setting of the film\'s story, the theme has an Eastern European quality, due in part both to the instrumentation and the structure of the melody itself, but also to the fact it is backed by dulcimer and clarinet. It is lonely, with mostly descending figures, beautiful and sad yet also tinged with mystery. The film features a notable performance by Viggo Mortenson, who also starred in Cronenberg\'s recent critically acclaimed 2005 film, A History of Violence, and the story reportedly encompasses organized crime families in the U.K., which includes Mortenson\'s dangerous character Nikolai, of Russian descent, and an innocent outsider, played by Naomi Watts, who inadvertently encounters evidence against this family.

The two opening tracks, "Eastern Promises" and "Tatiana", combine into arguably the most winning ten minutes of the album, with the latter showcasing the solo violin in the virtuosic display of a lovely yet still melancholy new theme and its variations, all set against lightly swaying strings, these becoming a recurring component of the score. Pizzicato strings, dulcimer, tambourine and mandolin being added energy and color to the music here. Brass are then introduced in "London Streets", adding a bit more weight, while the main theme and a rising, repeated harp arpeggio return in this mysterious and measured track. Anyone familiar with not only Cronenberg\'s films but Howard Shore\'s unique contributions to them should be able imagine the careful, sometimes chilled, progression of themes presented during the narrative arc.

The main theme receives further melancholic statements and variations throughout, but its character often remains the same as essayed by solo violin or clarinet and accompanied by harp and dulcimer. "Vory v Zakone" introduces a new brief 4-note motif for horns, mirrored in strings, which arcs upward in opposition to the downward trend of the primary theme, the sections grouped tightly together harmonically. The character of this motif could be seen as a once resounding, proud fanfare but we are only now being exposed to as a weary shadow of its former self. Meanwhile, "Slavery & Suffering" features a downtrodden male chorus, aided by dulcimer and mandolin, singing an approximation of an old Eastern European hymn, or an actual one.

The mood does lighten by way of "Anna Khitrova" and its playful pizzicato strings and subdued tango tempo, while "Nine Elms" spends its running time moving from rising, anticipatory tension in strings and low brass, to an unadorned reading by solo violin and finally settling back into on the rising, repeating figure normally heard on harp, which feel almost akin to a boat lost on an indifferent yet calm sea. The final tracks provide sorrowful readings of the main theme, though in "Trans-Siberian Diary" seems to herald the decisive start of something new in the story with a string ostinato more engaged in its support while the horns suddenly intercede in a decidedly forceful form. This is all soon wrapped up expectedly by the lead narrator, solo violin, resolute yet burdened, and with minimal support.

I think this would be worth investigating for fans of Shore\'s more subdued work in Cronenberg, such as Dead Ringers and eXistenZ, as opposed to those who might be looking for Lord of the Rings or Soul of the Ultimate Nation. Either way, there is some hypnotic, enveloping thematic material here to enjoy, especially in the opening selections. Howard Shore\'s scores for Cronenberg tend to envelop the films for which they were written, providing a distinct, consistent and tactile atmosphere instead of just commenting and accentuating specific onscreen actions. The atmosphere could be pervasive dread, paranoia or regret, but the instrumental colors and often opaque themes carry the purposeful feeling throughout the film, truly helping to immerse the audience in its world.