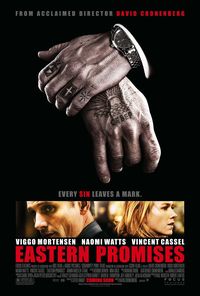 When a 14-year old girl dies giving birth, the midwife Anna (Naomi Watts) discovers her diary, written in Russian. Seeking to have it translated, she takes it to a Russian restaurant where she meets Semyon (Armin Mueller-Stahl), who agrees to translate it for her. Little does she know that Semyon is actually the leader of one of London\'s most notorious Russian crime families, and the diary is directly tied to his organization. His son Kirill (Vincent Cassel) is trying to move up in the ranks with the help of Nikolai (Viggo Mortensen), and a power play is brewing - and Anna just stumbled into the middle of it, putting her life - and those of her family - in danger. Such is the plot of David Cronenberg\'s latest film, Eastern Promises.

Cronenberg\'s films are known to be rather violent, and this film is no exception. Nikolai is a mysterious yet brutal character who keeps crossing paths with Anna, who wants little more than to figure out who can take care of the baby. Kirill is a mischevious playboy who runs a brothel filled with women who come to London believing they can have a new life, only to find themselves basically enslaved in the sex trade. It\'s an unapologetic view on mob life, and Cronenberg doesn\'t hold back. The signature sequence in the film is a brutal hand-to-hand fight in a bath house, as a naked Nikolai fights off two attackers. It\'s intense and raw, and hard to watch.

The score by Howard Shore features violin solos and a very ethnic Russian vibe, and works well in the film. The movie has some pacing problems, though, and spends too much time talking, and less time moving the plot forward. It\'s well done, and Mortensen should be commended for his role, but it\'s not something to rush out and see in theaters.