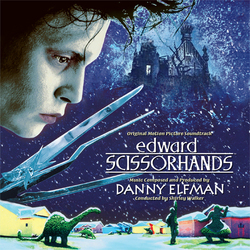 In Celebration of the 25th anniversary of Tim Burton's Edward Scissorhands, Intrada presents an expanded edition of Danny Elfman's mesmerizing, fairy-tale score. Keying off the film's opening with the 20th Century Fox logo adorned in falling snow and echoing the effect of snowflakes, the score starts with celesta notes and a soulful boys and women's choir—Elfman's own Dance of the Sugar Plum Fairy.

The composer's opening showcases two melodies: one accentuating the fairy-tale aspect of the story, while a beautifully resolving melody underscores the emotional core of the tale. Edward Scissorhands, in fact, allowed Elfman to explore a wide range of expression, from the opening fairytale vibe to the creepy, semi-suspenseful atmosphere of Eward's castle, and the cheerful, innocent pizzicato of the world outside that Edward discovers.

Presented in cooperation with 20th Century Fox and Universal Music Group, this expanded edition is in near chronological sequence (some short cues were repositioned for musical purposes) and includes a suite of extras featuring the trailer, alternates, Tom Jones' "With These Hands" and Christmas carols.