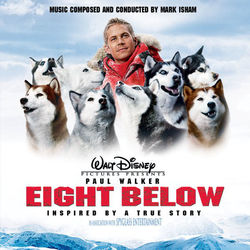 I want to begin by saying that I am not very familiar with Mark Isham\'s extensive filmography, which has spanned many different genres since the early 1980\'s. From dramas like Crash to thrillers like Twisted, Isham is probably best known for his action/adventure scores such as Rules of Engagement, Blade, or even Miracle. I am actually most familiar with his fun score for the IMAX film Galapagos. Eight Below fits in with the latter adventure category and Isham brings a large orchestral sound to the film.

In a Debney-like fashion, Isham mixes soaring brass themes over swirling strings. His main theme, which is introduced in the overture and reprised in the end credits, is heroic and uplifting and performed on various brass instruments. After the opening cue, "Journey Begins/The Crevasse", the theme is used sparingly and is usually only hinted at. It makes a strong return in "Almost Perfect" in the solo French horn, underscored by pulsating trumpet chords.

Using a mix of instruments, including piano, acoustic guitar, marimba, woodwinds, and other percussion, Isham brings different feelings to each cue. "Southern Lights" is a good example of some of these styles, as is the moving percussion and guitar in "The Search". "The Rescue" is a very good action cue, but surprisingly does not utilize the main theme. This score sometimes feels like it may have been limited in its development by the progression of scenes on film, with some exciting cues dropping off to nothing a bit quickly. Nevertheless, Isham\'s music brings to life the journey across Antarctica with an exciting and heroic score. The score is available exclusively through iTunes, and if one does not want to buy the entire album, the overture and end credits cues are definitely worth your time and money, as are some of the other cues mentioned above.