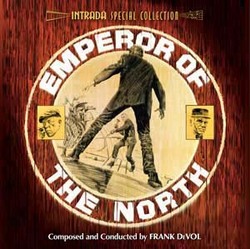 Emperor of the North / Caprice

Review: Emperor of the North / Caprice

In the roster of Silver Age 60s movie composers, especially those who first came to prominence in that decade, Frank DeVol\'s name doesn\'t tend to come up that much. In truth he never really knocked one out the ballpark like his contemporaries. He did though score quite a few extremely well known pictures: The Flight of the Phoenix (1965), Cat Ballou (1965), The Dirty Dozen (1967), Guess Who\'s Coming to Dinner (1967), Krakatoa: East of Java (1968), Ulzana\'s Raid (1972), and The Mean Machine aka The Longest Yard (1974).

Like Jerry Fielding and Quincy Jones, DeVol was a gifted band arranger and graduated to television and then films in the early 60s.

Able to switch quite happily from comedy to drama, in truth he was not what one would categorise as a heavyweight composer. His style, not easy to pinpoint, was in creating memorable themes, and, if this isn\'t too damning a description, adequate underscore. If such a thing were produced, a CD of DeVol theme tunes would be a terrific thing to own. His theme to The Flight of the Phoenix perfectly complimented the dynamic visuals that accompanied the opening credits. Similarly, his grand, rousing theme to Krakatoa did much to elevate this Cinerama epic.

He was more at home though with comedies or lighter fare, where his melodic and charming compositional flair were more easily accommodated.

The two scores offered in this handsome Intrada release perfectly illustrate this dichotomy in DeVol\'s range. First up is the score to Robert Aldrich\'s Emperor of the North aka Emperor of the North Pole (1974). This tough, half-forgotten gem of a film is a depression-era tale of a seasoned hobo (Lee Marvin – who else?), who takes aboard a train guarded with sadistic relish by train conductor (Ernest Borgnine – again, who else!). The film is beautifully shot in Oregon by Joseph Biroc and is a truly tense and engrossing film.

If I\'m completely honest, there is insufficient material here to recommend this outright as a listening experience. Certain tracks work, like \"High Balling and Main Train\" and \"Burning Freight\", which both display an interestingly tense motif, heavily percussive and quite effective in their insistency and switching back and forth between a traditionally tense suspense style, and more modern beat progressions; and \"Terror Chase\", which despite its name turns out to be a flapper tune played deliberately off-key, giving it an interesting slant. But elsewhere, and too often, the thin orchestration does the film no real favours. In places it just comes across like a quickly executed movie-of-the-week underscore. The song which appears – \"A Man and a Train\" is sung on the CD by Bill Medley but apparently in the movie itself it was performed by Marty Robbins – it\'s been a while since I saw Emperor, and I can\'t honestly say whether the Medley version is an improvement or not, but it\'s an adequate (there\'s that word again) leitmotif for Marvin\'s character. For me, the points at which this score take off in an interesting direction are when DeVol uses a modern palette to underscore the 30s drama, this anachronistic approach seems to work better than his more oft-used standard melodramatic phrasing which unfortunately just isn\'t as muscular as the story or its characters.

Caprice, directed in 1967 by Frank Tashlin, is the dictionary definition of a frothy 60s caper movie, and more or less a perfect assignment for DeVol. This comedy thriller starring Richard Harris and Doris Day as an industrial designer who falls foul of sinister forces when she sells a top secret cosmetics formula to a rival company is as whimsical as its title. It\'s really no better or worse than the truckload of spy spoofs that clogged cinemas in the mi 60s. It was part of Day\'s efforts to try and break free of her goody-two-shoes persona, but in retrospect it\'s just a continuation of the same shtick she began with Rock Hudson in the late 50s, which is not necessarily a bad thing, it\'s just Doris Day with a gun. Tashlin brings some of his lurid comic strip style to the picture, but really it could have done with a whole lot more, such as Joseph Losey\'s Modesty Blaise of the same year.

Devol\'s score to Caprice is precisely what you\'d expect of a film like this – glossy, overly melodramatic here and there, a bit lounge in places. Again, it\'s not bad per sé, just unmemorable. You yearn for the touch of Hefti or Schifrin, or perhaps Goldsmith or Johnny Williams in their \'67 styles. It\'s the work of a slightly older composer than the material requires trying to be \"with it\" and only half succeeding. \"The Fountain\" is a good track I have to say, it grooves along quite nicely, a neat mixture of jazz and big band swagger, but it\'s as far as DeVol\'s palette can manage in capturing the zeitgeist. \"Hanging Hair\", which is probably the track which is meant to illustrate Michael J Pollard\'s hippy character, is amusing without coming close to really nailing that particular type of personality.

Overall, the Caprice score is efficient, a workaday, typical example of this type of movie\'s musical soundscape, but it never flies, never achieves the more memorable heights of its nearest rivals, say The Liquidator (1965), Our Man Flint (1966), Penelope (1966), or Arabesque (1966).

I\'m not anti-DeVol, but I maintain his considerable talents lay in composing memorable themes, and these two scores, as welcome as they are in being made available at all, have done little to alter that opinion.