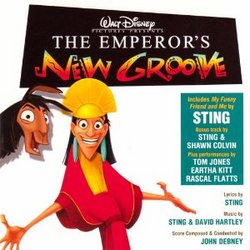 What happens when two years of work goes down the drain in one fell swoop? The uneven musical chaos that is Walt Disney's 39th animated feature: The Emperor's New Groove. Based upon a completely different movie The Kingdom of the Sun, Groove is a pared down version of the story with a faster tempo and completely different songs.

Former Police front man Sting wrote several songs for Kingdom of the Sun including "Snuff Out the Light (Yzma's Song)" and "One Day She'll Love Me". These songs were scrapped for the new faster-paced and funnier Groove. Being the good sport that he is, Sting wrote new songs for the re-edited movie including the Oscar nominated "My Funny Friend and Me". As a result, Disney repayed him with the inclusion of the Kingdom songs on the soundtrack and a heavy (and successful) PR campaign for "My Funny Friend and Me" which earned Sting the nomination.

Despite the uneven mix of fast paced songs and the slow tempo ballads by Sting, the soundtrack comes out on top. The opening number "Perfect World" sung by Tom Jones is difficult to get a grasp on when you first hear it, but after multiple spins it turns it to a real foot mover. Thankfully, the wonderful CD booklet contains not only colorful images from the movie, but also the lyrics to help you during these sometimes difficult to understand songs.

All of the Kingdom songs are really great songs, and I am glad Disney saw fit to include them here; otherwise these classic songs might never have been heard.  Another highlight of the album is "Run Llama Run", from John Debney's original score.  It is a cue perfect for any chase sequence. The music written exclusively for Groove also shines with some great beats that are sure to send you tappin' away.

Running almost 50-minutes long, the album contains an enjoyable mixture of songs and score.  Featuring some of the better music from the "Mouse House" in the past few years, The Emperor's New Groove is a good soundtrack worth adding to your Disney collection.