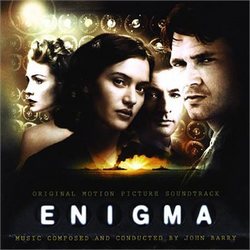 Performed by
Members of the Royal Concertgebouw Orchestra

If you can listen to more than a few bars of Enigma and not recognize it beyond all reasonable doubt as a John Barry score, then no film music aficionado are you!  Few composers have as distinctive a style as Barry.  In fact, it has led to much criticism over the years that his scores have all begun to sound the same, and to that criticism, I have this answer: yes, much of his music sounds quite similar to his other scores - but I'll still take a new John Barry score over most new film scores.

Enigma is scored in the classic Barry style - very sparse thematic material given to very broad orchestrations.  There are three themes in Enigma - the main theme, the "suspense" theme, and a secondary theme which is a close cousin to the main theme.  This main theme is a haunting motif, always heard on solo piano over sustained chords in the strings and brass, until it's given a brief orchestral treatment over the end credits.  There has been much criticism that this theme is over-used - that Barry digs it into the ground.  Granted, there's not much variation from statement to statement, but what it comes down to is whether or not you really love this theme.  I do, and therefore, I don't get sick of it.

I find that the suspense music is the score's greatest weakness.  Barry has done substantially better work in that field, but that's not what I imagine one would turn to this score for.  The secondary theme is, again, piano-based and quite lovely.  The main and secondary themes together comprise a wonderful end credits sequence, which leads into some source/period music that I could do with or without.  Overall, this is a wonderful album to listen to if you're looking to relax at the end of the day.  It's nothing terribly original, but I don't think it really needs to be.