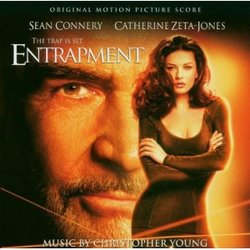 by David A. Koran January 27, 2000
4 / 5 Stars
Once again, composer Chris Young expresses his flexibility between genres by producing one of the more suspenseful scores of the year with Entrapment. It's easier to believe Chris's ability to write a good score to this film than the supposed chemistry between the leads of Sean Connery and Catherine Zeta-Jones. There is also a good hoot, as with most of Young's CD releases, that the track titles are rather funny, in their own distorted way. For the title track, Young however, seems to take a formulaic approach by relying upon rhythm conventions that Mediaventures might employ, but still able to take it somewhere that he can call it his own. "Fayeth In Fate" (Track 3) has a nice subtle piano piece, approaching a jazz mentality, slowing the pace of CD down nicely between the action/suspense cues. With the addition, however sparsely, of electronics in the next cue "Bright Moments", Young learns how to sound like Jerry Goldsmith, and properly integrate his use of orchestra and synthesizers. The next several tracks are very much like Elfman's and Silvestri's take on several sequences in Mission Impossible, sneaky-action type music with a lot of percussion and low strings punctuated occasionally by brass and synthesized samples.


For the second half of the CD we're given some more modern "sneaking about" music with low brasses, real and synthesized percussion, and the occasional sharp strings to punctuate the action on-screen. A rather predicable environment setting track, "Kuala Lumpur" sets the listener up to the fact that Connery and Zeta-Jones are, in fact, in Kuala Lumpur, the capital of Malaysia. One of their heists in the movie, seen in the preview as a black suited figure swinging between the Petronas Twin Towers, the tallest building in the world. I think a stunt like that would need no "setting" music, but with "Impossible, But Doable" Young continues the trend of creating a subtle edgy atmosphere. Much of the rest of the CD continues in this trend making the entire 54 minutes of this album a bit slow to get through. The last track, "Thank God", is a nice change, thematically speaking, and integrates a bit of a song by Seal heard in the end titles, which is obviously a reason to change from action music to a ballad. For those looking for the end title song by Seal, it's not contained on this "all score - all the time" release, but maybe it should to at least bring the end of the album on an up note. Luckily, Young hasn't tried to emulate similar picture's scores such as Hudson Hawk, but may have been able to take something away from The Thomas Crown Affair, or even, To Catch A Thief. Overall the CD is marginal at best, but obviously works well within the film since most of the music revolves around trying to add suspense to the on-screen action. For die-hard Chris Young fans, you will most likely be able to hear him in his element later this year with Teaching Mrs. Tingle.