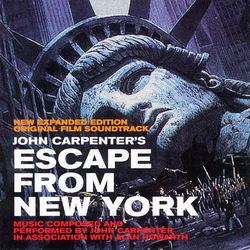 Escape From New York is another movie in John Carpenter's long line of work that has reached cult status. Although a mild hit upon its initial release, like most of Carpenter's films, it found its audience on cable and video. Its futuristic premise is by now familiar to all: an infamous criminal is sent into the maximum-security prison of Manhattan Island to rescue the president. Although it spawned scores of imitators, no one else quite captured Carpenter's anti-authority attitude, cynicism, or sense of humor. It also helped jump-start Kurt Russell's career as an adult actor with his dead on portrayal of the ultimate anti-hero who always gets the last word.

The score for EFNY is a seminal piece of work for Carpenter as a composer. Moving away from the simplicity of his earlier work on Assault on Precinct 13, Halloween and The Fog, Carpenter, working with Alan Howarth, created a score that was more fitting for an action movie yet maintained his trademark dark, moody undertones. The score bounces around from up-tempo action cues to brooding atmospheric ambience. They also manage to throw in late 70’s disco beats (the Duke of NY’s theme) and calypso drums (for the final car chase). One of their gifts is creating simple melodies and having them stick in your head. There are several cues used for pacing, yet they stand out because of their simplicity and the subtle variations within them. The score is highly enjoyable and has been a personal favorite ever since I saw the movie. Although it sounds dated at times, the score remains one of Carpenter’s best, showing a wide range of sounds and styles, yet tying it up into one cohesive whole.

Alan Howarth is primarily responsible for this great sounding expanded edition. Where the old Varese Sarabande edition was created back in the analog days and was rife with hiss and poor stereo separation, this new remastered edition is almost a revelation. It sounds terrific considering the age of the source materials, and the cleaned up sound renders the different layers of sound more audible. Hiss and low volume problems have been done away with, and the bass and separation have been given a boost. The unreleased music consists of cues missing from the previous version as well as cues that were dropped from the movie entirely. With the exception of one cue, all the unreleased cues fit right in with the older material. The one cue that doesn’t fit at all is the original end credit song, "Snake Shake". Its tone is too light and playful and was wisely dropped from the final cut with the main title music reprised at the end. Snippets of dialogue have been smartly interspersed throughout the album without stepping on any music tracks.

As great as this CD sounds, it still has a few problems. While the booklet claims that all the music from the previous release has been included, that is not the case. There are two tracks that have been inexplicably truncated. One of them, "The President is Gone" has been shortened by 40 seconds and isn’t hurt by it. But the other track, "President at the Train", is missing an important action cue. Snake and the newly freed President are sneaking away when the Duke’s cronies jump Snake. In the previous version, the track was as it appeared in the film complete with a scream as the first guy jumps Snake. From there the cue picks up the pace again as Snake puts up a fight before being subdued. Those of you familiar with the score know exactly what I’m talking about. If you have the volume set high, the scream almost always makes you jump. In the new version, the track fades out abruptly and segues into a dialogue track. Why cut it? There’s no reason to truncate it, and there’s plenty of room on the disc.

The other problem with this CD is the bad remixing of a few tracks. While most of the remixing is fine, there are a couple of tracks that suffer from it. One is "Engulfed Cathedral". The original version as heard in the film had the low notes, which serve as the backbone of the piece, flow into one another. This piece accompanies Snake’s flight into the prison at night. It’s a beautiful piece now marred by the new version which has these low notes clipped. The other track that suffers is "Over the Wall", which now sounds like cheesy B movie synth music borrowed from a video game. I suppose an apt comparison would be hearing your favorite piece of music conducted by someone other than the original conductor. Sure, the notes are the same, but the pacing and the feel of it are simply different and it rubs you the wrong way.

For those who already have the old version, keep it if the aforementioned problems are enough to bother you. Quibbles aside, this is a must have CD for any Carpenter and Howarth fan and for anyone interested in the development of electronic music used for scores.