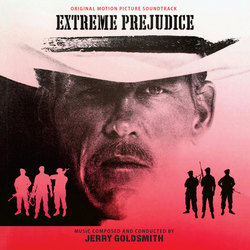 For its latest release, Intrada revisits one of the earliest releases in its catalogñthe 1987 Carolco production Extreme Prejudice. Deep into the '80s now, composer Jerry Goldsmith continued his exploration of blending orchestra and electronics, artistically finding an intersection that could bridge tradition and modern ideas. Extreme Prejudice provided an ideal canvas to further this examination, as it could be considered a western set in contemporary times. The score was recorded with the Hungarian State Opera Orchestra, which had previously recorded Goldsmith's Hoosiers and King Solomon's Mines, plus three musician's from the UK to perform the electronic parts.The music features a driving rhythmic idea that unifies the score as it appears in several guises throughout. As the film moves south of the border, so does the score, introducing a theme reminiscent of Goldsmith's amazing work on Under Fire. Highlights include the driving main title, the nine-plus-minute action cue that is up there with many of Goldsmith's top action cues (and removed from the film!), and a melancholy, gentle theme for Jack's personal, strained life.

The original Intrada release was assembled by Jerry Goldsmith and Bruce Botnick back in 1987 and was subsequently re-issued by La-La Land Records, which added the electronic replacement score. For this new release, Intrada presents the complete score in film order, including selections not previously released, as the composer originally envisioned the score. The electronic replacement score is presented in its own suite after the main program. A second CD includes the original album presentation and its unique and musical assemblies.

The film, starring Nick Nolte and Rip Torn, centers on Texas Ranger Jack Benteen, operating in a Texas town embattled by the drug war. Jack's most significant relationships are with the seasoned local sheriff, Hank Pearson; his childhood friend, Cash Bailey, now a powerful drug lord in Mexico; and his girlfriend, Sarita, whose allegiance is torn between ex-flame Cash and the increasingly obsessive Jack. Into this powder keg drops Special Forces spook Major Paul Hackett and his Zombie Unit of officially. Ostensibly, their mission is to take down Bailey in clandestine fashion, robbing a bank where his assets are kept. But Hackett has ulterior motives. Hank is killed in an explosive shootout, the heist goes wrong, loyalties are betrayed, and it all culminates in a south-of-the-border bloodbath that calls back to Sam Peckinpah's The Wild Bunch.