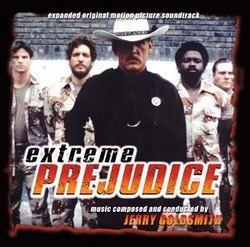 I remember in 1992 picking up the original Intrada release of this 1987 Jerry Goldsmith score, not knowing anything about it, and my opinion has never wavered: it is one the coolest, toughest and brawniest scores the man ever composed. There is so much energy, inventiveness and strength in the music, both rhythmically, melodically and orchestrationally. Goldsmith had been experimenting with electronics for years but starting in 1983 they began to seriously dominate his work until at least the early 90's. As evidenced in Legend, Innerspace, Supergirl and Extreme Prejudice, the electronics were not there to replace the orchestra but to augment and embellish with tones and timbres acoustic instruments could never achieve. With this film, they helped to paint a picture in harsh, heated hues and its uncompromising, unmerciful characters. This new edition from La-La Land Records adds an additional 14 minutes to the original album's running time while the score as a whole is remastered for greater clarity.

The new sequencing begins with appropriately track titled "Extreme Prejudice". This had been composed specifically for an early trailer of the film, but this ended up being unused. It is a great summation of many of the best elements of the score, from the drum machines to the main ostinato (heard in the basses here), beefed up brass and driving tempo. The "Carolco Logo Music" is next and is neat little treat for this release, considering how many films Goldsmith for that company. "Arrivals" is the first actual cue of the film, beginning in mid-tempo with the constant main theme ostinato at the helm, punctuated snare drums and trumpet calls heralding the arrival of each main character. This horn led theme also gains much prominence over the course of the score. At the three minute mark, the track kicks into high gear, applying buzzing synths, high range strings and woodwinds while ending with a strong finish.

"Cash" spells out another side of the film, melancholy and sometimes mournful. A lone trumpet displays the main theme leisurely yet pensively, which then moves into an oboe rendition with electronics whirling beneath it all. This track then moves into a motif for the lead villain Cash: a lonely, high synth which glissandos down into a waver, sounding somewhat like a twisted, old Native American wind instrument. These two themes circle around each other in subsequent tracks, both backed at various times by the main ostinato, chattering trumpets or new thematic material. "The Set-Up" and "Dust" continue developing these ideas into what becomes a modern Western setting.

By the time the film has its bank heist set piece, the score ended up heading in two directions. Goldsmith's original cues for the sequence utilized the already established orchestral and electronic pairing, but took it to new dramatic highs over its 9 minute running time with surging strings and French horns. Director Walter Hill asked Goldsmith to instead travel down the all electronic path for this part of the film and for the first time, these cues make their appearance on album. "The Plan", "The Bank (Pts 1, 2 and 3)" and "The Bank (Pt 4)" cover much of the same ground as the original cues, but do strike out in new directions electronically and thematically. Fans of Goldsmith's 1984 score for Runaway will be interested in hearing these mighty, propulsive tracks.

When the picture moves into Mexico for its third act, a new theme is heard in "No Friendlies". It is not unlike some of the thematic material developed in Under Fire and just as rewarding, especially as it is brilliantly expanded into the end credits cue. Other closing highlights of the album include the tense "The Don’t Care", featuring Cash’s electronic motif once more, and the "The Funeral", sadly unused in the film, which grows into a quietly optimistic piece with the main theme on woodwinds. The detailed and informative liner notes talk about the film's production and the background on the music, and provide a lot of interesting material. There is much to enjoy in this seminal and often overlooked 80's work from Goldsmith, a decade of highlights just as the 70's also provided his fans.