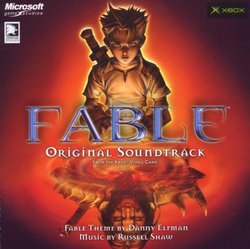 Danny Elfman's distinctive voice in film music exploded into the industry in the late 1980's and he continues to work as one of Hollywood's most popular composers. Recently, Elfman wrote the main title theme to the role-playing video game, Fable. The theme is classic Elfman, with a strong brass theme and percussive electronics reminiscent of his more recent scores, such as Spider-Man. Composer Russell Shaw wrote the score to the film and for some of the cues, he maintains Elfman's style with choir and chimes behind the orchestrations ("Darkwood"). However, the music is generally low-key to create a playing atmosphere for the various landscapes of the game.

Most of Shaw's tracks each have a distinctive sound and the second half of the album have little consistency. "Temple of Light" consists of electronic bells, "Bowerstone" is plucked strings, and "Guild" and "Fresco Dome" feature solo synth male and female choirs, respectively. Elfman's theme is barely used, appearing once in a short version on the French horn in "Darkwood" and again in the flutes in "Summer Fields". Elfman's theme is great, but the score that follows is generally atmospheric and of little interest. "Hobbes Cave" contains a brief moment of powerful music, but it quickly dissipates. Check out Elfman's theme, but as an album, this game score falls short.