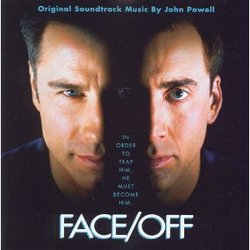 by Dan Goldwasser February 20, 2000
3.5 / 5 Stars
FACE/OFF, the high-octane action movie by acclaimed director John Woo was fortunate enough to have John Powell write the score. The score fits well into the film, and therefore is a worthy addition to the "Percussionistic Action Music" category of your soundtrack collection. (Other composers in this category include Hans Zimmer and Mark Mancina.)

1 - FACE ON (4:57) This first track begins with almost musicbox-like theme, which is underscored with low strings performing one of the main themes present in this film. We are suddenly overtaken by ominous choral tones (when Nicholas Cage's character is preparing to shoot John Travolta's character in the opening sequence). We revisit the musicbox-like theme shortly, and then progress into a nice choral piece, "Since By Man Came Death" from Handel's Messiah, which is mixed into the score rather well to convey the emotions of the scene.

2 - 80 PROOF ROCK (4:28) This next track scores the jail sequences (before the escape). A lot of percussion and dissonance is prevalent throughout the scene, but then we find ourselves in the scene where Travolta and Cage confront each other in the prison and shorty afterwards when Travolta (really Cage) saves Los Angeles by disarming the bomb.

3 - FURNITURE (7:11) The action packed scene at the airport (at the beginning of the film) begins with a bass as Cage exits the car, and approaches his airplane, preparing for his escape. But Travolta shows up with the calvary, as heralded by a lot of overlaping trumpet fanfares. We now enter SPEED mode, as the percussion and orchestra builds up a pace which then accumulates the main action theme of FACE/OFF (at 2:58, to be specific) which I find to be highly effective throughout the sequence. The fight then moves into a hanger when the plane collapses. At 4:40 we encounter a rhythm sequence very similar to Mancina's score to BAD BOYS (which regrettably was never released) and then we encounter the main action theme again as the fight reaches a conclusion.

4 - THE GOLDEN SECTION DERMA LIFT (3:13) This music takes place when Travolta is trying to figure out whether or not he should exchange faces with Cage. The action music at the beginning of the track is from some other scene (I apologize for not being able to place it - the movie is not on video until November). We then move to the music-box theme, which is basically the "family love" theme as Travolta tries to tell his wife that he has to do "one last thing", and the music takes a sadder tone as she tells him to leave.

5 - THIS RIDICULOUS CHIN (6:49) We encounter a floating otherworldly motif, similar to TOTAL RECALL, for a quick moment as Travolta goes to the institute where he will trade faces with Cage. The music maintains a tense feel to it as the surgery proceeds, and the faces are traded. After the surgery (2:50) Travolta experiences grief as he looks into a mirror and sees Cage staring back. The emotions he feels are enhanced by the sad music we hear. The music then continues as Cage (really Travolta) is sent to the prison where he must find out from Cage's brother where the bomb is held.

6 - NO MORE DRUGS FOR THAT MAN (7:27) The musicbox theme comes in again as Cage (Travolta) takes refuge (and drugs - but not knowingly) at one of Cage's associates' lofts. He meets Cage's old girlfriend, and then her son, who is also Cage's (but Cage doesn't know this - Travolta now does, and it reminds him of HIS son who was killed by Cage at the beginning of the movie). As such, we get more of the sad music similar to the end of track 4. But this is quickly quenched as Travolta (Cage) prepares to ambush the loft, along with more action cues.

7 - HANS' LOFT (3:35) The fast-paced, high-octane action theme comes into play again here as Travolta (Cage) ambushes the loft. Lots of gunplay, and lots of action scoring which fits the pace, tempo, and events on the screen. In the film, there was a great scene where "Somewhere Over The Rainbow" was used, but this was not included on the CD. Lots of good action cues in this track which builds as the loft is basically destroyed.

8 - READY FOR THE BIG RIDE, BUBBA (3:53) The music here appears to be after the end of the big chase at the end of the movie. We get to encounter the "family love" theme again, partly underscored with chorus as Travolta gets his face back, and the family agrees to adopt the boy who was Cage's son. (The mother was killed in a fightout at the church.)

This score fit the movie very well. While it did have moments which sounded a bit too simila to the scores produced at MediaVentures, I feel that it stands well on its own. With multiple solid themes that you can hum, and plenty of adrenalie-pumping action, FACE/OFF is a score worth getting, definitely if you've seen the movie.