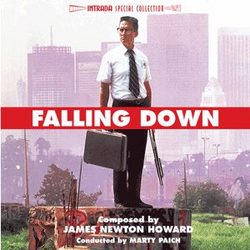 James Newton Howard's score to the 1993 film Falling Down marked his third collaboration with Joel Schumacher, after Flatliners (1990) and Dying Young (1991). He begins the score with an arresting portrait of irritation and building fury—jungle drums and abrasive effects grating at anti-hero William Foster until a low, angry horn announces his exit from his automobile and the beginning of his crusade against society. It's the start of a score featuring a complex meld of orchestral music blended with multiple layers of electronics and percussion, both real and synthesized. In keeping with the grim tone of the movie, Howard removed trumpets from the scoring (save one in two very key sequences). By omitting the upper brass register, he was able to lend the music an aura of intensity and impending tragedy without overt signs of warmth or optimism.

To present the world premiere release of James Newton Howard's score, Intrada was given access to the entire digital scoring session masters vaulted at Warner Bros. The scoring sessions were engineered at Todd-AO by veteran Shawn Murphy, who emphasized the crisp edge this particular score warranted; subsequent mixes were made by Murphy at Capitol Records.

In Falling Down, Michael Douglas plays William Foster, a former defense engineer who has lost his job and, in an ugly divorce, his family. As the film opens, Foster simmers in a Los Angeles traffic jam, finally abandoning his car in disgust. He quickly runs afoul of a Korean grocer and a couple of gangbangers, setting off a series of events that spirals out of control. Weary and seemingly disoriented, he keeps claiming he's simply trying to get home for his daughter's birthday, and he does so while placing increasingly threatening calls to his ex-wife (Barbara Hershey). A retiring cop, Prendergast (Robert Duvall), pursues Foster across Los Angeles, eventually facing down the engineer in a fateful confrontation in Venice.