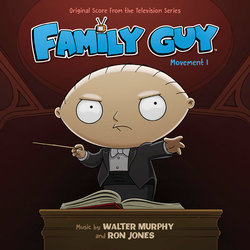 La-La Land Records, 20th Century Fox and Fox Music proudly present the world premiere release of orchestral score from the legendary animated FOX television series Family Guy. Composers Walter Murphy and Ron Jones have fashioned some of the most exciting and complex orchestral music ever composed and recorded for television. Swing, Jazz, Broadway, Big Band and Film Score genres collide in expressive, colorful bursts that have become a hallmark of this long-running and classic comedy series.

Show creator and performer Seth MacFarlane explains, "Both Ron and Walter played the show as if it were a completely sincere 'Leave It to Beaver' or 'Donna Reed-style' wholesome comedy. And it just worked really well... [The music] was always the most fun part of the process for me."

"Seth is really a collaborator," says composer Walter Murphy. "Most producers and directors really are not that musically astute. Seth is completely up on everything, and reads and writes music himself... We like the same kind of music in film scores."

"It is always the greatest pleasure and honor to create scores for Seth, Fox and the huge world audience that enjoys Family Guy!" remarks composer Ron Jones, who hopes fans will find new appreciation for the music on this release. "I think it will be like a fun scavenger hunt. It's loaded with motifs and little licks and things that are connected."

Produced by Dan Goldwasser, Walter Murphy and Ron Jones, and mastered by James Nelson, this special, limited edition release showcases suites of some of the finest Family Guy score cues from seasons 1-4, including such long-sought after tracks as the Chicken Fight music from "Da Boom" and the Sperm Wars cue from "Emission Impossible," among many, many others.

Exclusive, in-depth liner notes by writer John Takis include new interview comments from the composers and Seth MacFarlane, and the joyful art design by Jim Titus boasts a front cover with original art by one of the show's animators—commissioned especially for this CD release! This is a limited edition release of 5000 units—and a must for FAMILY GUY fans and any film/TV music enthusiast!