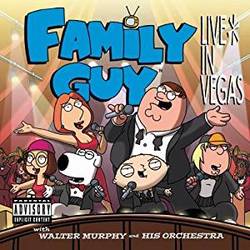 Performed by
Walter Murphy and His Orchestra / Family Guy Cast

The Family Guy... After making a monumental comeback on the FOX network, this pop-referencing, acerbic cartoon series spawned a fresh "soundtrack" in the style of classic Vegas. The album, co-written and produced with series composer, Walter Murphy, includes an enjoyable DVD featuring trailers, "Stewie's Sexy Party" music video, and interesting behind-the-scenes interviews. Totaling sixty-seven minutes of fun, this Geffen Records release is a freakin' sweet gift to dedicated fans, especially those that followed the show's commute to and from the Cartoon Network's Adult Swim after being prematurely displaced by FOX bigwigs.

Although not recorded in the actual Sin City, The Family Guy: Live in Las Vegas wonderfully merges the flair of big-band orchestras, with simulated, on-stage, Rat Pack-like performances, a chorus, and convincing live audience. As writer/producer/actor/creator, Seth MacFarlane, showcases his own smooth vocals in some of the best tunes; and alongside him, Alex Borstein, Seth Green, and Mila Kunis (doing more talking than singing, thankfully) help put forth an invigoratingly explicit show. The series itself isn't known for its subtle derision, so cursing aloud is just a natural extension of social, political, and aesthetic ridicule. (A great example would be the track, "All Cartoons are F***** D****".)

Since it's known that MacFarlane always had a love of musicals, it's really no surprise that Broadway great, Pattie LuPone, makes a special appearance in a raunchy duet with Glen Quagmire (voiced by MacFarlane). Adam West and Jason Alexander also drop by to sing a few bars with the Griffin family, while pop-star/actress, Haylie Duff, trades tacit barbs with Stewie as his disgruntled babysitter. Cast regulars, such as Lori Alan (briefly reprising her role as Channel 5's Diane Simmons) and Mike Henry (buddy Cleveland and dirty-man, Herbert), appear, but contribute little to the montage of invective-flinging goodness.

Nevertheless, wicked lyrics, presented à la jazz lounge, swing, cha cha ("But Then I Met You"), bossa nova, calypso, and cartoon styles, are frequently interspersed with colorful—or off-color—dialogue. The tone may be similar to South Park with the flatulence, swearing, and bawdy humor, but instead of a vortex of insanity and melodic screaming, the musical delivery of Family Guy is smooth, seductive, and has a semblance of class. And having to voice Peter, Stewie, Brian the Dog, Quagmire, and Tom Tucker, MacFarlane is most prominently featured in the album with myriad duets with Patty LuPone, Haylie Duff, Alex Borstein, and... (amazingly) himself. The best part: the closest that listeners will get to hearing MacFarlane's original singing voice are in his solo acts as Brian. Alone, without having to respond to the non sequitur outbursts from Griffin family members, Brian's songs are maudlin and dreamy, bereft hostility, but full of irony; "The Last Time I Saw Paris" is a Maurice Chevalier-styled performance complete with a French sweetie and Bob Hope-esque skit, his rendition of Antonio Carlos Jobim's "Slightly Out of Tune" comes across as a velvety, yet melancholy, quasi-siren-song, and "Dear Booze" is his fond ode to a constant love.

Lewd language and humor aside, a couple technical downsides to the album are the occasional song transition (fluctuating from tranquil to boisterous) and grating vocal performances (primarily by Quagmire, Herbert, and Chris Griffin—who has a fixed voice despite his full-length ditty "Puberty's Gonna Get Me"). As heard in Joss Whedon's "Once More, With Feeling" from Buffy the Vampire Slayer and Joseph LoDuca's "The Bitter Suite", the first of two musicals from Xena: Warrior Princess, television musicals can't always employ true singers even though actors can be made to "sing". Live in Las Vegas is mostly a soundtrack for hardcore fans or those possessing enough tolerance for graphic lyrics and out-of-tune melodies.

For anyone craving more than amusing dialogue, cameos, and playful melodies, one of the best things this album is the individual performances. Whether bitchy, sly, wry, or polite, MacFarlane plays Stewie Griffin to the hilt. (With the switch in medium, minor adjustment must take place, so visual gestures are replaced with great or crass commentary.) Not only is the baby able to curse like the deuce, but his diatribes are actually acknowledged by everyone—something that rarely happens onscreen except by Brian. (But fear not, Stewie reverts to his usual jilted self in the ultra-"jiggy", explosive music video.) Listening to Seth Green, as Chris in the abovementioned solo, is worth sitting through his entire song; to hear Green either break from character for a moment, or crack up over something Buffy fans might appreciate more than others is pretty funny. Stewie and Brian's "T.V. Medley" is enough to make one see how much fun Seth MacFarlane had during sound production. After episodes such as Road to Rhode Island and Road to Europe, it's fantastic hearing the rivals harmonize again and poke fun at each other in this album highlight. With the aid of Walter Murphy's spectacular orchestrations, the track covers popular 80s title themes such as Golden Girls, Family Ties, Who's the Boss, and Perfect Strangers. The exclusion of The Facts of Life, Mr. Belvedere, One Day at A Time, or other popular themes leave the medley feeling somewhat unfinished, but the choices of music and relevant segues are still hilarious.

As stated earlier, this is a soundtrack mainly for fans; it can't be argued that the music is no less than impressive, but the messages may offend. If you don't care either way, stop watching The Simpsons and get a load of this.