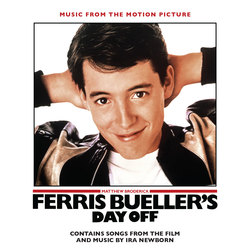 La-La Land Records and Paramount Pictures commemorate the 30th Anniversary of Ferris Bueller's Day Off with the world premiere of the official soundtrack album!

Ohh, yeahhh...! Requested by fans for more than three decades, the official, original motion picture soundtrack to the classic John Hughes film has finally arrived in a special, limited edition collector's CD, featuring songs from the film and the original score by acclaimed composer Ira Newborn. Long-sought-after and rare song tracks, like BEAT CITY by The Flowerpot Men, (mixed and mastered for this release by original artists Ben Watkins and Adam Peters) and I'M AFRAID by Blue Room (vocal and instrumental versions), make their CD world premieres here, while Sigue Sigue Sputnik's "Ultraviolence Mix" of LOVE MISSLE F1-11 makes its North American CD debut. Standout tracks such as Yello's immortal OH YEAH, The Dream Academy's ballad EDGE OF FOREVER and their museum-scene-instrumental PLEASE PLEASE PLEASE LET ME GET WHAT I WANT, Wayne Newton's parade-show-stopper DANKE SCHOEN, and more are showcased here, as well as the world premiere of composer Ira Newborn's original score.

Due to licensing restrictions, a few of the film's songs could not be included on this CD, but they are available elsewhere. This celebratory release is a dynamite listen, and its booklet a fascinating and revelatory read—an absolute must for fans. So get yours now, 'cause even Abe Froman's going to want one of these!