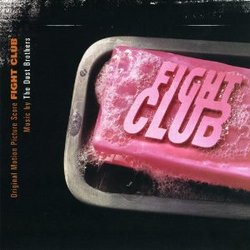 At some point through the production of Fight Club, it was determined that The Dust Brothers, not composer Howard Shore, would be scoring the film for David Fincher. The Internet Movie Database, however, inaccurately listed Shore as the composer all the way up until the film's release, no doubt because of Shore's work on Seven and The Game.

When asked why he wasn't scoring Fight Club, Howard Shore told SoundtrackNet that Fincher wanted more of a techno score for this film, which makes sense if you've seen the film.

The score that The Dust Brothers wrote worked well in the film—from the loud opening title sequence, all the way to the somewhat unsatisfying ending. (I did enjoy the movie, though - I just felt that the ending left me wanting more of a conclusion.)

The score mainly consists of a large bass rhythm, techno percussion beat, and some interesting keyboard and guitar effects that have been altered to lend a very interesting tone. There is also a lot of large brass section music that has been sampled and altered. Much of this music works great in the film, but as a separate listening experience, there really isn't a lot that makes this album stand out. A lot of the tracks come across as a little harsh or abrasive, but some, like the main title track, "Stealing Fat," (which was also used in the trailer to the film) have great rhythm and energy. This cue worked very well for Digital Domain's complex cellular pullback visual effect shot, but on it's own it sounds a bit more like a head banger's nightmare.

The album runs one hour long, and probably has about 15 minutes of truly listenable music. That opinion might vary from person to person, but I believe that in the end, we can all agree on one thing: the score to Fight Club is one of those scores that works well in the film-but doesn't stand on its own.