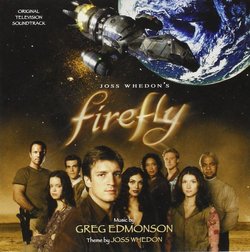 To read my original (in more ways than one) review of the music from "Firefly", click here. Now, this will be more of a caveat than an actual review. Firefly was released as both a digital download and a Varese Sarabande CD. Which should you get? You\'d think the answer would be simple: the Varese CD offers you the same music plus some bonus tracks. So who needs the digital download, right?

A complication arises when one realizes that the Varese CD does not have the exact same music as the digital download. Certain tracks have different cues mixed in, some elongated versions of what you get in the download, others completely different pieces. Case in point: a 35-second acoustic guitar piece has been inserted in the middle of "Leaving/Caper/Spaceball" on the CD. The "Book" cue from the "River\'s Afraid/Niska/Book" track on the download seems gone on the CD, replaced by more music from the episode where Mal was tortured by Niska (the third cue in the suite is now called "Torture"). "Book" has actually been moved to the end of the CD and has been retitled "Tears". "Inara\'s Suite" contains one more cue on the CD, but don\'t look for the track "Goodbye Early" on the Varese release: it\'s gone.

The bonus tracks on the Varese CD, however, tilt the balance firmly in their direction. These tracks are easily the best on the album and the cues available digitally pale in comparison to those CD exclusives. "Cows" features comedic elements in the form of out-of-tune banjos and whiny fiddles. The strong Western elements continue in "New Dress" and "My Crew", creating a very solid suite of what Greg Edmonson did best on the series: scoring the Western half of the show. "Burgess Kills" expands on the action sequence signature sound by adding some driving lines on the strings, making this a more enjoyable chase cue than "Saffron". "Captain & Ship" strengthens the bond between Mal, his crew, and Serenity with tear-jerking violin harmonies, soft piano chords, and guitar accompaniment. The pièce de résistance comes with "Reavers" which fills in a hole left by the original digital download: introducing the Reavers\' motif, a complex amalgam of nasty metallic percussion perfectly capturing the essence of the unseen characters. The fact that they didn\'t release "River\'s Dance" the first time around can only make one shake his head as it is a great traditional source cue borrowing more than a little from Irish music. "Inside the Tam House" bridges the European and Chinese cultures by combining a Romantic piano line with a flute and fiddle melody built in the Asian mode. The album concludes with "Dying Ship", featuring more great lyrical music from "Out of Gas", before segueing, tongue in cheek, to "Naked Mal", a minimalist comedic piece for plucked strings and soft percussion.

Which should you get? Most people will be plenty satisfied with the CD release. The completist should get both (that\'s the guy who\'s taken up Chinese lessons to be able to say "all the cow turd in the world thrown in your face" when his hard drive crashes). It is a little puzzling to get bonus tracks on a CD that eclipse the quality of cues already released as a "best of" album, but the world doesn\'t always make sense. And I\'m still waiting for those Chinese 101 tapes to arrive through the mail....