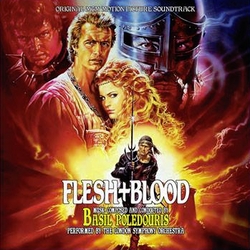 MGM and La-La Land Records are proud to present the "RE-re-reissue" of one of Basil Poledouris' finest scores—Flesh+Blood. If you are a previous owner of this magnificent score there is absolutely no need whatsoever for you to purchase this score again (unless you are a label completest). However, if you did not get the chance to purchase this amazing score—a score much in the vein of the composer's Conan music—then I highly recommend buying this muscular action fantasy extravaganza!

While retaining the Intrada releases running order, the new album's producer (Ford A. Thaxton) along with the mastering engineer (James Nelson) have tweaked the sound to their liking. New liner notes by Randall D. Larson have also been added to this release. Previous releases of Poledouris' Flesh+Blood have featured album notes incorporating comprehensive analysis of the film's musical score in detail. Rather than rework the same type of commentary here, Larson decided to let Mr. Poledouris speak for himself. He went back to the original interview that he and David Kraft did with Mr. Poledouris at his home on May 19, 1985, which to our knowledge was the only detailed contemporary interview he gave on the subject of this film. Much of that lengthy conversation has remained unpublished until now. Classy art direction by Mark Banning is the cherry on top.