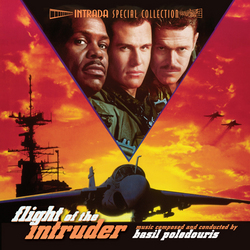 Flight of the Intruder

In 1990, composer Basil Poledouris teamed up with long time collaborator, director John Milius to score the Paramount Pictures film Flight of the Intruder. Stylistically, the score contains military themes and action as one would expect, but surprisingly turns into more poignant, sad territory, reflecting the internal conflicts of the on-screen characters. Although it has a typical Poledouris theme, a rousing call-to-arms motif, the overall feeling is muted, conflicted, and, like the film, utterly at odds with itself. And it features one of the last major works by Poledouris to make its appearance on CD.

For this premiere release, Intrada presents the score from the 1/2" three-channel mixes stored at Paramount, presenting the score in a clean, crisp and complete light. As an added bonus, the album includes the trailer music composed by John Beal.