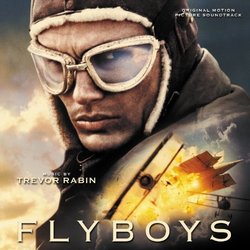 I will begin by saying that I had high expectations for this score. This is due to Rabin\'s last war epic, The Great Raid, which is easily his best score to date. Most listeners may not notice, as the film was somewhat under the radar, but Rabin reuses one of the themes from American Outlaws as his main theme for Flyboys. The "Main Title" introduces this theme on the flute and, with a bit of Celtic influence, it then takes on a brass-heavy patriotic tone similar to The Great Raid. "Training Montage" opens with a brief brass quartet solo and then moves into a piccolo and snare theme similar to John Williams\' The Patriot.

Rabin uses both themes throughout the score and while the orchestral score is very good, the similarities of his music to other scores make the listen fall a bit flat. Secondly, a number of the cues are very short, coming in at under a minute and break up the listening experience, such as "We\'re Out of Gas". One shorter track, "The Planes Arrive", is a slower cue that opens with a flute solo, which is taken over by a French horn. The score is actually a bit slower than I had expected, with a large portion of the album devoted to the romantic moments in the film.

Highlights of the score are the battle cues, such as "The Last Battle" and "Heroes". These tracks include both themes in full with strong brass performances. Towards the end, "Battle Hymn" breaks up the action cues with a brief choral piece, a common element in war film scores these days, and a pounding anvil comes in behind the chorus. "Black Falcon" adds the chorus into the action music as the score begins to slow to a close and moves into the final cue, "Briefing Room". While Flyboys continues the general tone Rabin developed for The Great Raid, it borrows too much from other scores to make a strong impression on its own. Fans of Rabin\'s will likely enjoy the album, and there are a number of good cues here, but I find The Great Raid a better war film score.