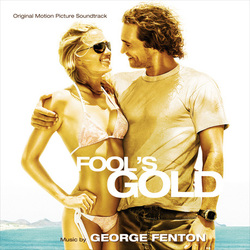 I rarely like comedy scores. While I appreciate that they are very difficult to write and time to the film, I tend to avoid them. However, George Fenton\'s Fool\'s Gold is a glaring exception. Fool\'s Gold is the latest incarnation of Peter Benchley\'s The Deep (following Into the Blue from 2005). The nature of this film\'s genre allows for the comedic elements to be orchestrated in a Caribbean style that is both effective for the comedy and fun to listen to - not to mention that Fenton wrote one of the best themes of the year for this treasure hunting flick. "Fool\'s Gold Legend and Main Title" starts out dramatically with a sweeping pan of a tropical island. An acoustic guitar introduces the theme, which is then picked up by a bold French horn. Then the cue breaks into a samba featuring a fast paced acoustic guitar as Matthew McConaughey\'s boat sinks while he SCUBA dives beneath it. Steel drums, trumpets, and electric guitar riffs keep the cue lively and tied into the location and style of the film.

This scene, of course, leads right into "Where\'s the Boat?" This cue accentuated the comedy with steel drums guitar. "Late for the Hearing" continues the Caribbean samba style. The orchestra grows as the film moves on, giving comedic cues like "Trouble in the Churchyard" a bolder sound. The Caribbean style also gets an action style in "Saving Gemma\'s Hat", which also takes on a jazzy feel. However, the action sequences nearly throw out this style and settle for a bold, brass dominated set of cues that would be at home in McConaughey\'s other film of this genre, Sahara. "Finn to the Rescue" is a good example.

There are three themes in Fool\'s Gold. The main theme, introduced in the main title, a love theme, and a discovery theme. The latter is featured twice, in "Discovering the Canon" and "Sharing the Spoils". The love theme is not in the first half of the score because Kate Hudson\'s Tess hates McConaughey\'s Finn. This theme is introduced halfway through in "Tess\'s Theme" and gets a stronger statement in ""The Day Dive", both times on guitar. This is also the theme that is performed at a much faster tempo in the main title after the horn introduction of the main theme. Here it just serves as the motif for the guitar and the slower incarnation later becomes the love theme.

There are two reasons why I consider the main theme to be one of the best this year. Firstly, the melody itself is great, featuring a series of three chord progressions that increase its heroic nature with each. Secondly is Fenton\'s use of the theme. It is only featured in 7 of the 21 cues on the album, but each one is different and makes for a very interesting and enjoyable album. Following its bold introduction, the theme gets a comedic treatment in "Where\'s the Plate" and again in "Sabotaging the Grid". The latter is underscored with brass and percussion. It is given a slow treatment with the full orchestra at the end of "Aurelia and the Queen\'s Dowry" after Finn and Tess explain the history of the treasure.

The best cue on the album is the heroic brass statement of the theme in "The Standoff" after a buildup in the strings continues through the cue as underscore. The statement of the theme is powerful and worthy of something from Pirates of the Caribbean, but sadly we only get this one statement of it in this style. The last two statements end the album. A romantic version on the acoustic guitar opens "A Nice... Soft... Landing" backed by horn and moving into a variation on the theme. "Sharing the Spoils" opens with the discovery theme and ends with a full orchestra statement of the main theme with a trumpet countermelody. Fenton is recently best known for his Blue Planet and Planet Earth scores, but clearly relished the opportunity here to exercise his action and thematic skills. Despite the enjoyable nature of the film, Fool\'s Gold is not a great movie, but Fenton\'s score is a surprise gem and one of my favorites so far this year.