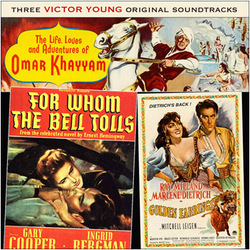 For Whom the Bell Tolls / Golden Earrings / Omar Khayyam

This is an official CD premiere for the first two original soundtracks by Victor Young (1900-1956) gathered here, For Whom the Bell Tolls and Golden Earrings, while Omar Khayyam benefits from an improved sound quality over the Tickertape CD released many years ago. According to our usual practice for vintage soundtracks, all three recordings were restored from vinyl sources for optimal results.

For Whom the Bell Tolls, with Gary Cooper and Ingrid Bergman, takes place during the Spanish Civil War, on the eve of the Second World War. The numerous musical influences that show up in the score form a colorful mosaic. Golden Earrings, starring Ray Milland and Marlene Dietrich, is set in Germany and concentrates on the Gypsy people at the time of the Nazis. Finally, Omar Khayyam, a romanticized biography of the Persian poet and mathematician, relies mainly on Arabic music of the Middle Ages.

In addition to the exotic context, the common characteristic of this program is the predominance of strings and especially of the violin, Victor Young's favorite instrument (and one he trained on from an early age). Here the violinist most often holds the melody and carries the emotion as well, like a projection of the composer's spirit.

These scores, set in different places and time periods, produced within a space of fifteen years, still bear the unmistakable signature of Victor Young; the foreign influences being blended and integrated in the crucible of his genius. 12-page color booklet.