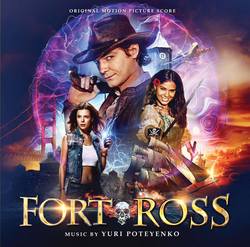 The score for Fort Ross was written by Yuri Poteyenko, who revisits his classics pirate-themed video game scores as well as one of his own personal favorites, Isaak Dunayevsky's score for the Soviet production of Captain Grant's Family. The lush, symphonic swashbuckler score pays equal parts homage to Hans Zimmer's Pirates of the Caribbean for the marauders as well as John Williams whimsical family adventures for the journalists' adventures. Recorded in Moscow, the score recruits all the top talents of the local film music scene who contributed to Poteyenko's past successes. The CD comes with 8-page liner notes by Gergely Hubai discussing the film and the score.