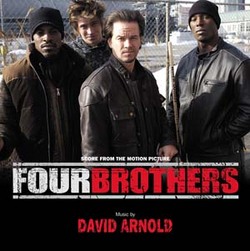 After exploding onto the filmmaking scene with Boyz N The Hood, director John Singleton quickly followed up with other "important" films like Poetic Justice, Higher Learning, and Rosewood. In recent years, though, he has opted to focus more on commercially successful ventures such as Shaft, 2 Fast 2 Furious, and now, Four Brothers. In this humble reviewer\'s opinion, Singleton has not sold out, but rather has provided an opportunity for those of us who appreciate his work to enjoy the imprimatur he places on the urban action genre.

The namesakes of Four Brothers are the adopted sons of a kind woman who decided to raise, by herself, those children who were so difficult that foster homes were an impossibility. Over the years the brothers, played by Mark Wahlberg, Tyrese Gibson, Andre Benjamin, and Garrett Hedlund, grew up and moved on. They are reunited in Detroit when their saintly mother, under puzzling circumstances, is mercilessly gunned down in a convenience store. They want some payback. The remainder of the tale focuses on the ties that bind, those that don\'t, and the calculus of revenge.

Singleton brought back Dave Arnold on board to handle the score, the two having worked together before. Arnold, who is arguably best known for his work on spectacle films (Independence Day, Stargate, and Godzilla) as well as his work on the James Bond franchise (Tomorrow Never Dies, The World is Not Enough and Die Another Day) turns in a remarkably strong score for what is a much smaller film than his usual fare. One of the biggest challenges that Arnold faced here was realizing that as much as any of the actors, snowy and barren Detroit was itself a vital character in the film. To that end, making frequent use of trumpets, soft percussion, synthesizer, and guitar, he composed not so much an action score as a modulated jazz/funk operetta. The result seamlessly weaves together not just the scenes in the film, but the soul of the film.

Satisfyingly consistent for the most part, the score does have some standout tracks. "Thanksgiving" is one of the few places where Arnold chose to insert just a hint of soft gospel-style background, but to good effect. The piece is touching, and helps ground the motivations of each of the four brothers. "Surveillance Camera" is a generally ordinary track, but a few phrases of it did a cunningly good job of pulling at my heartstrings. "Shoot Out," the first true action piece on the score is frenetic, compelling, and in many ways (not counting the use of electronics), sounds as though it belongs in a Western. Considering that the movie itself oftentimes feels like a Western revenge film, this actually works pretty well. This track also wisely uses the main theme, first heard in "Four Brothers."

"400k Plan," starts off sounding like so-much background music, but about a minute and a half in becomes something else entirely. Using a groovy synth rhythm, the piece slowly builds for the remaining three minutes, alternating between quiet incidental music and a forceful presence. By the end of the track, my blood was pumping. The score finishes with "Rebuilding the House" as it began with "Four Brothers" - quietly funky.

All in all, there are no bad cuts on this soundtrack. Some certainly outshine others, but I found it to be a completely enjoyable listening experience, start to finish. I never forwarded past a single track, and found it just as satisfying to accompany me on a drive as to provide background while I\'m working. While I get the sense that this could have been a mediocre score in other hands, Arnold has done a commendable job here.