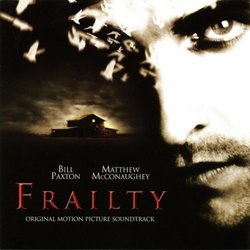 Brian Tyler highly praised score for Bill Paxton's directorial debut, Frailty, elevated him into the position of a highly sought composer. The film's critical praise stemmed from the right mix of vision, acting, story... and the music. Tyler had written scores for horror films before (Terror Tract, The 4th Floor) but his score for Frailty pulls elements from his earlier works into one of the best scores of 2002, which received as much acclaim as the film did. Following Frailty's success, Tyler hit the ground running in 2003 with a series of amazing scores including Darkness Falls, The Hunted, Children of Dune, and Timeline.

Frailty opens with "Main Titles", which presents the theme for the film, a haunting melody in the strings, with dark, moving cellos behind; "Brothers" presents the second theme, an equally chilling progression of chords on the piano. Both themes weave chords into such a pattern of suspensions and crescendos that they stay in one's head long after the album has ended. The drama of the music increases throughout the album, featuring racing low strings, pounding timpani, and the occasional woodwind and brass to create a sense of dread ("Fenton"), yet beauty ("Thurman, 1979"). One highlight of the album is "Rose Garden", which refers to a central location in the film, that opens with a series of chimes and then segues into drawn out renditions of both themes mixed with more chimes and cellos. The music here is the most suspenseful of the score, and yet Tyler maintains a hold on the thematic material and the music is still enjoyable apart from the film, a feat rarely achieved in horror scoring. The track closes with a soft female vocalist backed by light percussion in a brief wordless, themeless performance. There is definitely a Bernard Herrmann influence on this score.

The soundtrack also features a song by Johnny Cash and two by Dale Watson. Neither really add to the album, though the liner notes discuss Tyler's and Bill Paxton's choice to include them. The score closes with "End Credits", which restates the themes and then builds them into a closing suite that gives a good summary of the album and makes a good cue for repeated play. Frailty was Tyler's breakout score and is easily the best thriller score in years. If you haven't seen the movie or heard Tyler's score, do so.