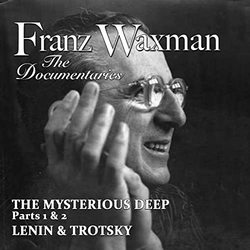 Dragon's Domain Records, to be distributed through buysoundtrax.com, presents the world premiere release of Franz Waxman: The Documentaries, featuring music composed by the legendary composer for selected documentaries from the documentary series The Twentieth Century.

The Twentieth Century was one of the most distinguished documentary series in television history. For nine years, from 1957 to 1966, this Sunday-night fixture presented well-written, thoroughly researched and compellingly filmed half-hours on history, science and culture. All were hosted by legendary newsman Walter Cronkite. Many of these programs featured original scores by some of America's most renowned classical composers. Executive producer Burton Benjamin and producer Isaac Kleinerman approved the concept and supported Symphony conductor Alfredo Antonini's series of commissions. Over the course of nine seasons, such noted composers as George Antheil, Darius Milhaud, Alan Hovhaness, Paul Creston and Ulysses Kay contributed original music.

In 1960, one more distinguished figure joined this group: two-time Academy Award winner Franz Waxman, who scored a remarkable two-part episode titled "The Mysterious Deep," about the world's oceans and what scientists were discovering about life beneath the waves. In 1964, he would score "Lenin and Trotsky," which examined the roles of these two Russians during the early history of the Soviet Union. Waxman composed and orchestrated the scores, which were conducted by Antonini in New York a few weeks before each program aired. These three programs are believed to be Waxman's only work in the documentary field.

Four years later, Twentieth Century engaged the composer for another documentary, a historical look at the men behind the Bolshevik Revolution. Waxman was no stranger to the Soviet Union; he was the first American conductor to conduct the major orchestras of Moscow, Leningrad (now St. Petersburg) and Kiev. "Lenin and Trotsky" aired on May 3, 1964, and was considered enough of a television "event" that the venerable TV Guide magazine showcased it in a half-page Close-Up.