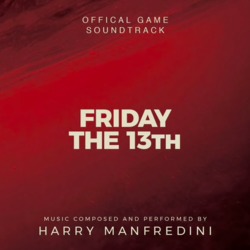 Friday the 13th: The Game

La-La Land Records proudly presents the original score to the Gun Media videogame Friday the 13th: The Game. For this white-knuckle thrill-ride of a multi-player game, based on the legendary horror film franchise, there could only be one man to score the gameplay's musical sounds of terror – none other than iconic Friday the 13th composer himself, Harry Manfredini. Manfredini unleashes his immortal Friday the 13th soundscape on a whole new platform, for a whole new generation… and it's a masterstroke of musical terror that pushes genre scoring in all kinds of exciting directions – recalling his original motifs while exploring new terror-laced ideas. Produced by Harry Manfredini and Dan Goldwasser, and mastered by James Nelson, this 2-CD set is a revelation for all Friday fans and genre music enthusiasts. Art design is by Izzy Cable/Gun Media.