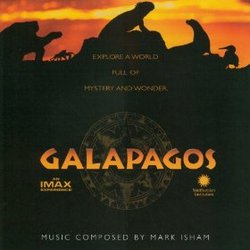 by David A. Koran July 9, 2000
3.5 / 5 Stars
Although I can’t say I’ve seen every single IMAX film that’s been released, the ones I have seen have been extremely impressive, and the scores written for the majority of them have been excellent. Mark Isham’s entry into this realm is for the film Galapagos, about, you guessed it, the Galapagos Islands. Given Mark Isham’s previous works, both as film composer and jazz musician, the producers for the film gave the nod, to I think, was probably one of the few folks who could provide an otherworldly musical composition for an otherworldly place like the Galapagos. In line with his first film scores for Never Cry Wolf and Mrs. Soffel to some of his later scores such as Nell and October Sky, Isham sets up an atmosphere that encompasses the settings and themes of the film. He could have easily gone either totally electronic or totally acoustic with the approach, but Mark found a perfect middle ground musically here on Milan’s release of the score for the film.

There are some boundaries imposed on writing music for IMAX, and that is, the score needs, in away, to be as big as the film. Now, this is not to say its knock you out of your seat loud and bombastic, but needs to fill an acoustical space that is missing from the projected presentation. In all of the IMAX scores I have heard from folks like Alan Williams (Amazon), Bill Conti (The Grand Canyon), and veteran Steve Wood (Everest and The Living Sea), the music has helped add another dimension to the filmed images. With Galapagos filmed in IMAX-3D, the music helps add that fourth dimension to help bring the audience even closer into the film without having actually being there on location. The Galapagos Islands are an odd place, and Isham uses a number of instruments that help convey a bit of that oddity. From the didgeridoo and panpipes to tiples and charangos (stringed instruments, like guitars and mandolins, from the Andes), Mark uses the full spectrum of instrumentation and melody for this score. Many of the tracks are very lyrical to express many of the wonders of the islands, while others are more rhythmic, helping to give the islands a heartbeat, like the living entities that they are. Some tracks are brooding and atmospheric, but as a whole, it’s served its purpose and supports the film perfectly.

With the film only running 40 minutes, and the willingness of Milan to produce a comprehensive and complete album to support the film, we get a full 40 minutes of music on the CD. The film is wall-to-wall music and it’s great to see all of it represented here on this release. For film score enthusiasts, they will nod their heads with approval of such and undertaking, even if they are not a born a bred fan of the composer. Plus, I’ve never seen an IMAX film that I haven’t walked out of with a deeper appreciation or greater sense wonder about the subject matter, and here is no exception. You can never say that about your cut and dry Hollywood picture by any means. For those IMAX score collectors, go and see this film and pick up the score, it’s a keeper, shelve it next to Blue Planet and The Secret Of Life On Earth. Maybe with any luck, IMAX will continue to release their film scores for the rest of us to hear.