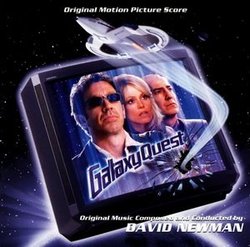 Galaxy Quest was one of the few films in 1999 that I truly enjoyed. Sure there were good films all year round (and quite a few bad ones), but none of them (with the possible exception of Being John Malkovich) truly provided sheer enjoyment. Yes, the film wasn't perfect—but in it's perfect satire on "Star Trek" and other ill-fated sci-fi television shows, it was truly a gem in the rather dull 1999 holiday season. What the film truly needed, as it was a sci-fi satire, was a great theme. That theme came from David Newman, and the remaining orchestral underscore he provided is a large, operatic action score that fits the film perfectly.

Beginning with the "classic" television show theme, we are introduced to the main theme that will return time and time again throughout the score. In "Prologue: GALAXY QUEST clip," we immediately get a sense of the grandeur that Newman is bestowing upon this score. "Pathetic Nesmith" is a rather sterile cue in which Newman uses airy synth and a rather sad piano rendition of the "Galaxy Quest" theme. This is immediately countered, however, by "Revealing the Universe"—a great sequence in the film that builds quickly to a full choir and orchestra in a 2001-esque moment. (In the theaters, it's really impressive—you have to see it.) From this point on, the score takes on an otherworldly tone. It becomes choir-heavy (which for me is a very good thing), and the music becomes more "fanfare"-ish and confident.

There are plenty of great action cues, including "Red Thingie, Green Thingie," "Rock Monster," the appropriately titled "Fight Episode #17," and more. All of them seem to use variations on the "Galaxy Quest" theme, and take full advantage of the orchestra. One interesting musical moment comes with "The Battle"—which starts out as a variation on the main title cue from The Phantom. There is definitely emotional development (as there was in the film - which is nice considering that some other films that season were severely lacking in any emotional growth) in the score, which is apparent in some tracks as "I'm So Sorry" and "Goodbye, My Friends."

This score was only released as a promo album, so it most certainly won't be found in stores. But at only $19.99 and easily purchased through SuperCollector, it should be a no brainer. Go get this CD, and then wonder why we haven't had more legitimate releases of David Newman's works.