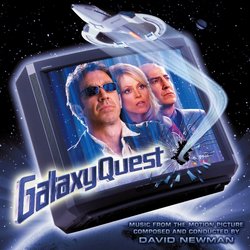 This science fiction score is filled with huge choral passages and those melodic themes that make the Newman name synonymous with film music! Previously released as a composer produced promo only, La-La Land is proud to officially unleash this fantastic score on CD, longer and sounding grander than ever.

As an added bonus, the first 100 customers who purchase the CD directly through our website will receive their booklet autographed by composer David Newman at no extra charge! Quantities are limited.