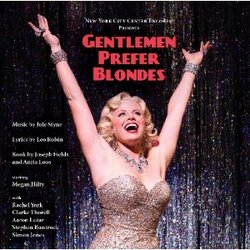 One of the glories of the American Musical Theatre, Gentlemen Prefer Blondes has seldom been revived since its creation in 1949.

In early 2012, a luminescent production brightened up the fabled Encores! series at New York City Center, with Megan Hilty, star of the TV show Smash, mesmerizing audiences as Lorelei Lee. With Rachel York, Clarke Thorell, Aaron Lazar, Stephen R. Buntrock, and Simon Jones in the supporting cast, this recording offers a first complete overview of the Jule Styne-Leo Robin hit and, in addition to the various songs and reprises, includes several orchestral interludes in a superlative presentation of this legendary musical.