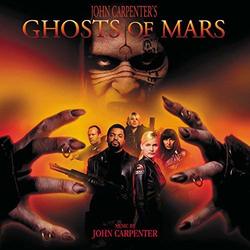 John Carpenter's Ghosts of Mars was by far the most entertaining movie of the summer, and it died an unjustly death.  Love it or hate it (there is no in between with this one), it was a B-movie that knew it was a B-movie and didn't try to be anything else.  Basically a transplanted version of Carpenter's Assault on Precinct 13 with a bit of H. P. Lovecraft thrown in, it delivered the goods on tight action sequences, macho Western archetypes, tons of violence, and gallows humor.

For his 14th score as a composer, Carpenter once again delves into a different approach.  Partially foregoing a complete synth score for Vampires, Carpenter rounded up a collection of blues musicians and gave the film a much needed Western feel.  On the album, Carpenter's synth score is almost absent and is replaced by a cadre of speed metal riffs.  While watching the movie, the speed metal motif works great.  It complements the out-of-control on screen carnage and whips the audience into a mosh pit-like frenzy.  While the bulk of the score is primarily driven by staccato rhythm guitars and wailing solos, Carpenter's spooky synth score underlines the quieter moments early in the film.

For the Ghosts of Mars soundtrack, Carpenter rounded together a great group of metal guitarists - underground fave Buckethead, NIN's Robin Finck, Anthrax's Scott Ian, soloist Steve Vai, and Elliot Easton.  When you have a group like that, you're not going to let their efforts go to waste or remain unheard.  While half of this album is music from the film, the other half feels more like a collection of freestyle sessions.  Cues that were fairly short in the film are allowed to run on and on while whichever guitarist is featured on the track goes into an overlong solo and a display of technique.  Most of the time, this material just isn't that interesting.  They don't convey any feeling of the movie, its atmosphere, or its wicked heart.

Consequently, the tracks that really stand out are the ones that are faithful to the film.  "Love Siege" and "Kick Ass" both feature scorching solos from Buckethead backed by Anthrax.  Both serve as the pulse to the film and a reminder as to why you bought this CD in the first place.  Unfortunately, other tracks are similar to the ones that appear in the final film but are mixed differently.  Two such frustrating cuts are "Fight Train" and "Can't Let You Go". "Fight Train" starts off the same as the cue in the movie but quickly veers off into several guitar solos, whereas the film's version kept a hard staccato rhythm the whole time.  In the film, "Can't Let You Go" had a nice Western guitar lick that paraphrased the title song as Ice Cube bids farewell to Natasha Henstridge.  The CD features a version that is not only mixed differently but loses the Western feel of the original track.  The Western guitar lick is now buried under a saxophone solo.

Most disappointing of all has to be the absence of Carpenter's synth score.  While Carpenter is playing keyboards on all the tracks, it's buried under a mountain of shredding guitars and pounding drums.  None of the quieter, ambient material is to be found on this release. There's plenty of room on the CD for it, but considering the direction and overall feel of the album, Carpenter's material would seem out of place.

Having seen the film three times, the wait for the soundtrack was almost unbearable.  Released about 4 weeks after the film's premiere, the CD can only be regarded as a disappointing missed opportunity. Firstly, the decision to release it so late is puzzling; the movie disappeared from theaters within 3 weeks.  Second, it's difficult to say to which audience this CD is aimed or marketed at.  Is it aimed at the people who loved the music in the movie?  No, because most of that music is absent.  Is it aimed at fans of metal guitarists?  I can't really say.  How many of them saw the movie or even knew these guitarists were on the soundtrack?  Even for their fans, most of the material on this album is sub-par for the respective artists. In trying to please both groups, this album satisfies no one.  Even die-hard Carpenter fans will be left scratching their heads over this lackluster release.