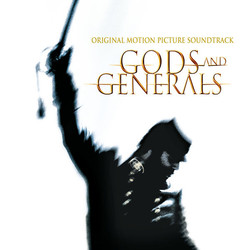 Gods and Generals, based on the book by Jeff Shaara, is a Civil War epic focused on Stonewall Jackson, as played by Stephen Lang.  The film also stars Jeff Daniels, Mira Sorvino, and Robert Duvall as Robert E. Lee.  Clocking in at three and one half hours, the film will be too much for some and has been derided by one reviewer as "stiff, ponderous, fluttering in its 'poetry,' and crudely simplistic as an apologia for the Confederate ideology."  Ouch.

The score is a joint work by Randy Edelman (Gettysburg, Shanghai Knights, Daylight) and John Frizzell (Cradle 2 The Grave, Dante's Peak, Ghost Ship).  There are also two vocal tracks, one by Bob Dylan ("Cross the Green Mountain") and another by Mary Fahl ("Going Home").  The score is competent and intermittently inspiring.  It begins with astounding strength in the form of "Gods and Generals," one of the most commanding single tracks of music I've heard on a score in some time.  "Gods and Generals" emphasizes a powerful choir, combining it effectively with percussion and strings.  That single track is a triumph.  Unfortunately, however, that triumphal presence is felt exactly two more times on the album.  Rather than sustain this impressive start, the rest of the score, while quite pleasant, feels like the soundtrack from all the other Civil War films you've already seen.  That's not to say that the Edelman and Frizzel's work is not good; it's just to say that it is, for the most part, no significant achievement.

The "Gods and Generals" theme appears in "You'll Thank Me in the Morning," in very similar form.  Indeed, it is really just a transposition of the same theme to a different mood, slowly building into the identical piece of music.  If you're like me, however, you won't mind this since the theme is so enjoyable.  If you sit through four more tracks, you'll find yourself greeted by "VMI Will Be Heard From Today," which is an object lesson in allowing a track to build to its inevitable, shatteringly good conclusion.  Combining elements of The Omen and Carmina Burana, the track is exceedingly dark but in no way ponderous.

All told, Gods and Generals is fine, and has hints – just momentary flashes – of greatness.  These powerful interludes make the score a worthwhile listening experience, but they also have the unintended side effect of underscoring the relative lack of distinction in the balance of the piece.  If you don't have any other Civil War scores, go ahead and get this one.  Otherwise, you may want to wait a few months and start looking for it in the used section.

(Editor's Note: this soundtrack comes with a bonus DVD, featuring video of deleted source songs from the film, two music videos, and more!)