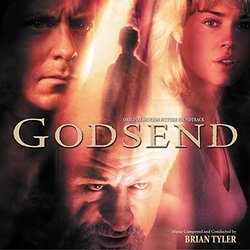 Hot on the heels of one of Timeline, one of his highest profile projects to date, Brian Tyler returns to the thriller genre in 2004's Godsend, a genre he made a name for himself in with earlier projects such as Terror Tract and Frailty. Godsend, while suspenseful and sometimes scary, holds an underlying theme of parents' love for their lost child and the longing to bring him back. As a result, Tyler's score for Godsend walks a line between horror and drama in a way that few scores are able to.

The main theme for Godsend is a slow, poignant, oddly beautiful melody in the strings and horns that is played out in full in both "Godsend Main Titles" and "Godsend End Titles" with light, ambient electronics drifting in and out of the beat. The general tone of the orchestrations for this score are along the lines of what Tyler used so successfully in Frailty and he uses the theme just as effectively. The score is generally atmospheric and dark, but the theme is played just enough to remind the listener of the score's identity, as in the tracks "To Godsend", "Draw the Burning Fields", and "Epiphany".

While Tyler uses some musical elements common to his work - such as soprano vocals, which add a haunting tone to "Regression" and "Funeral" - he uses one technique that is unusual for his scoring, and that is the use of silences. In the horror parts of the music (e.g. "Damp Woods", "Transfigurations", and "Shack in the Woods"), Tyler builds the suspenseful music to a crescendo, then cuts it off either to nothing or just a quietly droning synth. This effect takes the frightening, in-your-face orchestrations of Darkness Falls and adds a new level of tension. At the same time, the score does not become tedious to listen to (though some tracks can be skipped), as the main theme is never far away. "Draw the Burning Fields" is a highlight (besides an awesome track title) because it combines the main theme with some of the more suspenseful writing.

The score appears to end on a solemn note; "No Return" has a nice piano solo and contains the most melodic version of the theme. But "Completion" comes back with some harsh electronic crescendos before giving way to the end titles. Tyler's music is well-suited to the film and he uses both the thematic and various orchestral effects well. He continues to produce good, yet original, music for the films he works on.